All Around This Town!

We headed off to the city of Markham for what Victoria and Amy To call "mainland" dim sum at Ding Tai Fung. Unlike Cantonese-type dim sum with its push-carts and point-at-what-you-want-style, Shanghai-type dim sum is ordered straight from a menu. Additionally, dim sum pieces can also have soup inside of its pieces. 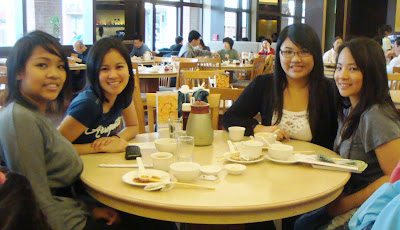 The girls and then I headed off to Honest Ed's Discount Store, a discount treasure at the corner of Bloor and Bathurst. Since 1948, the showy store serves as a landmark in Toronto with over 23,000 lights for its store front and dozens of witty signs hung inside. Thick winter coats? $3! Leather boots? $20! Good stuff! 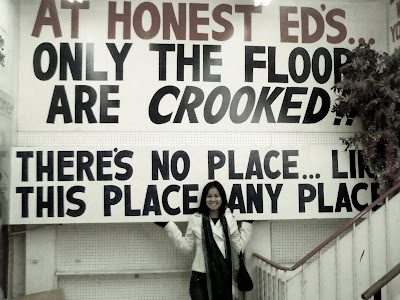 Honest Ed's! More than a discount store - it's a landmark!

We then headed off to the famous The Royal Ontario Museum (ROM), one of the "world’s leading museums of natural history and of world cultures." In this traveler's opinion, the museum impressively lived up to its expectations! The architecture of the building was creatively planned with multiple expansions while the inside exhibits features over six million pieces in over forty galleries. 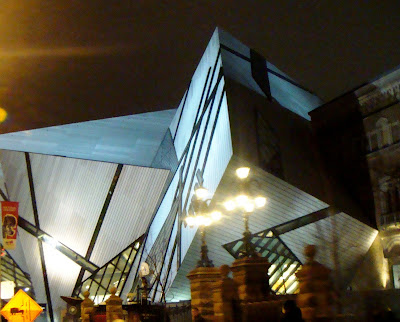 Royal Ontario Museum. Creative architecture, no?
The Gemstone Collection had to be the girls' favorite with the Children's Playzone winning the runner-up position. What can I say? You're never too old for interactive museum exhibits involving dinosaurs and dress-up!

Later that night, we went to Smoke's Poutinerie for a poutine dinner. With the girls ridiculously shocked that I had never eaten poutine in my life, I tried the gravy-covered French fries and cheese curd with some chili! Delicious, but definitely not for one on a diet! 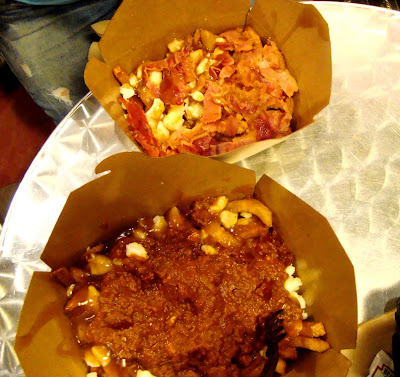 The relaxing night ended with live jazz at Rex Jazz & Blues Bar. The band consisted of four fifty-year-olds that could play and rock like they were in their twenties. Good stuff!
Posted by Krystina Nguyen at 17:59