9AM – Andrea DeRocco and I leave for Kousseri, the final Cameroonian city before one reaches Chad. This time last year, we met Joserine and Esther whom we later visited in Maroua, the regional capital of the Extreme North region. They closed down their salon and spa in Maroua and invited us to Kousseri to visit their hotel/cabaret/night club (very strong entrepreneurial women!). Joserne stated the city was only two hours away, so why not? 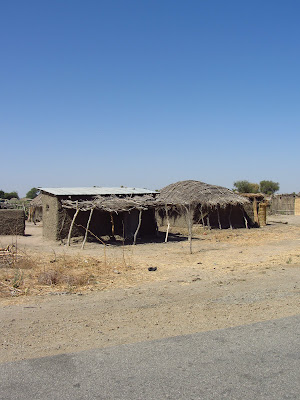 The road from Maroua to Kosseri, Cameroon

9:30AM – I ask the man next to me how long the trip would take. Usually about six hours, he says. Joserne = fail. At least I have a delicious fruit smoothie drink that resembled the ones I drank in Mali! 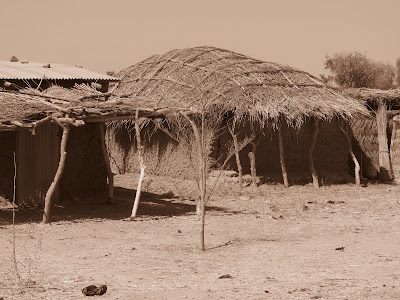 Still traveling from Maroua to Kousseri

3PM – We arrive in Kousseri. With trucks inundating the roads, it is easy to see how Kousseri is a transport city. Joserne picks us up from the Touristique agency and takes us to Hollywood Hotel (96 79 94 84 or 79 66 22 44). We get fed a delicious late lunch of fish brillon brought from the beaches of Kribi. 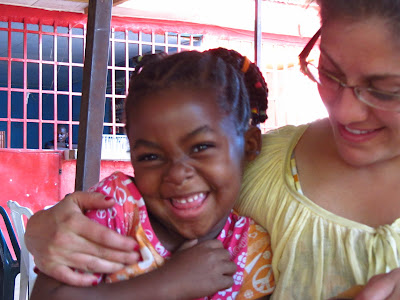 4:30PM – Kousseri has an amazing market selection as goods come from Chad, Nigeria, and the Central African Republic, so it’s shopping time! Esther’s son, Freddy, and his friend show us around. The number one good to buy: the beautiful scarves! 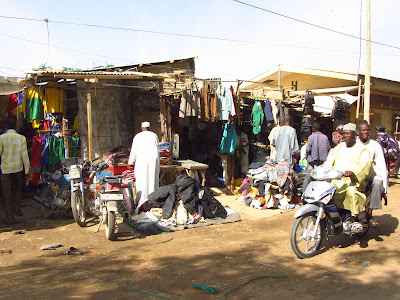 7PM – Time for the Cabaret! In Cameroon, a cabaret means that a singer/dancer or two will perform. 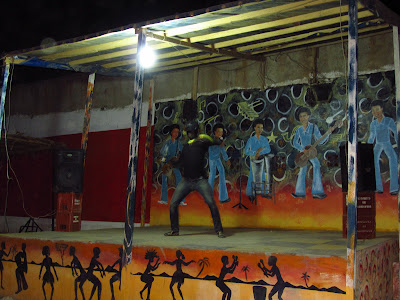 8PM – More fish for dinner! There are local “fish mommas” that grill fish on the hotel’s premises, so we eat grilled fish with cassava and onions. I ask Joserne why she told us it only took two hours to get to Kousseri when in reality it took six. “I lied to you because I wanted you to come!” Well played.

10PM – Nightclub time! The beauty of Hotel Hollywood is that the hotel, cabaret, and nightclub are all next to each other (or it might not be so beautiful if you like to sleep!). We mosey over to dance, but as Cameroonians like to arrive to clubs at 2-3AMish, we are the only three on the dance floor. It’s a good time though and fun to watch the bartender/DJ; the equipment is ancient to say the least and he rushes from bar to the DJ stand every time he changes a song.

1AM – I go to bed as the nightclub continues on.

4AM – I hear Celine Dion’s “My Heart Will Go On” playing from the club. Cameroon loves Celine Dion. I think it’s the last song of the night, but as I drift in and out of sleep, I hear at least half a dozen more songs by her. Oh vey.

Hiking Rhumsiki is Cameroon's number one tourist attraction (if you could call it that as not many tourists come to Cameroon in the first place!). Located in the Mandara Mountains of the Extreme North region, Rhumsiki is located just 3km from the Nigerian border. The native inhabitants to the area are the Kapsiki who live in thatch-roofed, stone homes.From the village of Mokolo, we jumped on motobikes to get to Rhumsiki at 2.500CFA each. I love negotiating with motomen as they always assume we are rich tourists and not Peace Corps Volunteers. If we were rich tourists, don't you think we'd hire a private car instead of negotiating with you over $1US? Case won!An hour and a half later, we were ready to hike. To the disappointment of the tour guides that surrounded us, we stated that we already had Oliver (70 58 01 13) to guide us around. A friend of a friend, he accepted 3.000/person no problem. The hike quite nicely parallels hiking Mali's Dogon Country. You are traveling through and surrounded by mountainous layers of Earth which have been untouched for generations. Cell phone service doesn't exist and time is relative. First stop: the Peak of Rhumsiki! 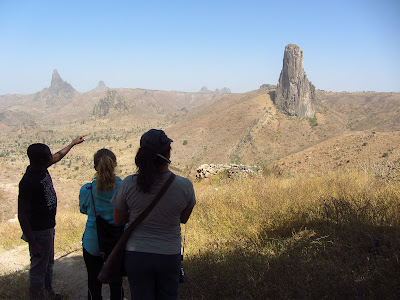 Peak of Rhumsiki
Oliver took us down to the Nigerian border before watching cotton being spun and playing a few traditional instruments. The prices of crafts were much cheaper than in town as the villagers make the crafts themselves. 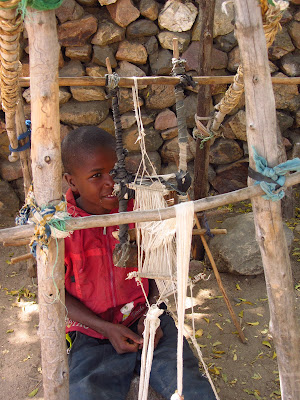 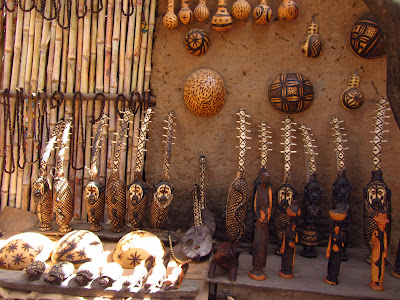 Traditional wooden instruments and crafts next to carved calabashes

Though it is a tourist trap, we had to get our fortunes predicted by the crab sorcerer! The old man comes out, charges you 1.000CFA (~$2US), lets a crab move around pieces of wood, and voila! Crab sorcerer translates what the crab says i.e. you will have a successful career, good fortune, and an attractive husband. But really, what else would you want to hear? 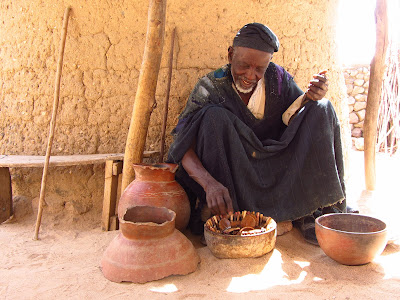 The Rhumsiki crab sorcerer! Yes, he will assure you of a happy life!
The three-hour hike ended with a nice stop to watch pottery being hand-made. Gorgeous to say the least! 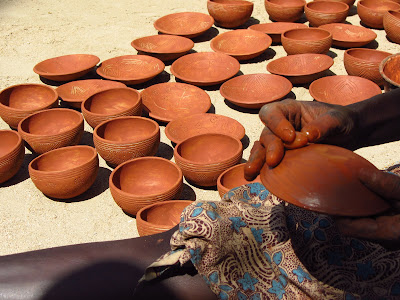 Hand-made pottery bowls
After the long walk, the best lunch in the country was had at Chez Kodji a.k.a. Kirdi a.k.a. Vegetarian Omnivore! The five-course meal for 3.500CFA (~$7US) includes garlic bread (with amazing basil sauce), pizza, barbequed kabobs, fries, salad, and a fruit desert! Great way to end the hike!
Posted by Krystina Nguyen at 23:59 0 comments

My favorite places to travel are the places most people won't. This is not so much because the places are unattractive, but rather, they are so far off-the-beaten path that they are just unheard of by any normal person. And this is where I like to step in.From the regional capital of Maroua, Crystal Leanza, Andrew Barrisser, Andrea DeRocco and I headed off to the village of Pouss with the 6:30AM agency car of D'jumare. Tip: Tuesdays are market day at Pouss! This makes transportation much easier and the village becomes alive. 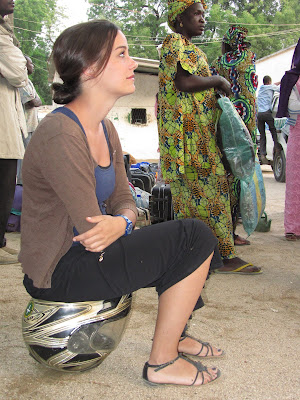 Motorcycle helmets are necessary for any Peace Corps Volunteer to wear. Annoying to carry around, they do make great impromptu chairs!
A couple hours later (and after a lot of dust due to the unpaved road), we finally reached Pouss. Just as I expected, we were in the middle-of-nowhere! Luckily, nobody seemed too phased to see four random Americans in their village. It was market day after all and we were just shopping like everyone else!Pouss was a gem! Here, we stumbled across Muslim men hand-making leather sleeves for knives. My friends piled up on the small knives selling for just 800CFA (~$1.60US) each. 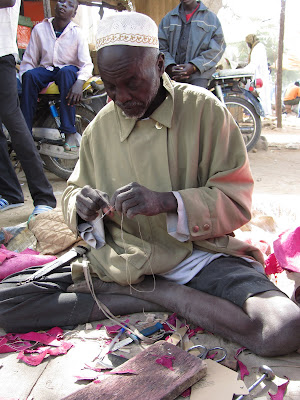 A Pouss specialty - making traditional knife sleeves from leather
After exploring a bit more, we came across traditional blacksmiths of the Extreme North. These happy-go-lucky men allowed us to sit around their fire while watching them make everything from shovels to axes. 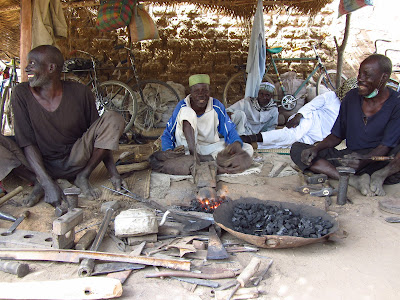 The happiest traditional blacksmiths in Pouss
Perhaps the most interesting aspect of Pouss was its decorated clay homes. I'll let the photo speak for this one! 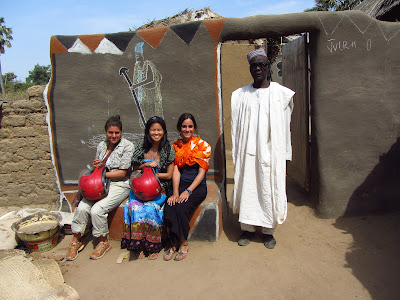 The traditional painted-clay homes of Pouss. He was so nice to let us take this photo!
We soon jumped on a motobike and headed to Maga, another village just 10km away. Though our motobike broke down (c'est la vie), we manged to make it as...well, things here in Cameroon always seem to just work out!After speaking with some very nice locals, they took us on a canoe ride around the Logon River for just 2.000CFA (~$4US). The Logon River separates Cameroon and Chad and for anyone interested in nature, my science teaching colleagues found some interesting sealife! 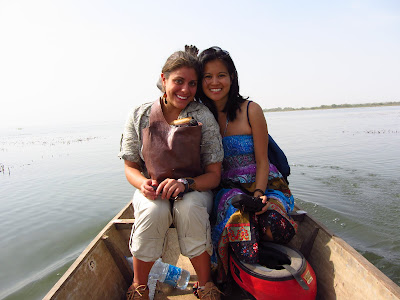 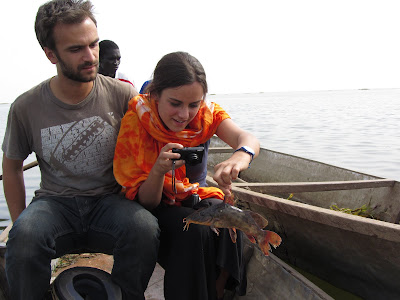 Canoe ride on the Logon River
Short clips from our day as my camera can automatically record a few seconds before every picture. Enjoy!
Posted by Krystina Nguyen at 23:59 3 comments

Governor's Support for the Peace Corps

One of the reasons why I love working with the Peace Corps is the amount of respect that one receives overseas. After I ran into the Governor of the Adamawa region during a women's entrepreneurship event, he requested that I set up a meeting to discuss my development projects.

When I showed up to his office, there were actually 10 people in line in front of me (appointments regularly overlap or become cancelled due to "African time"), so I waited patiently.  As the Governor walked out, everyone stood up and he stated that I was a Peace Corps member and he had to meet with me first.

The conversation consisted of updates from my projects (see "My Peace Corps Projects" to the right) and how development is a slow process, but a possible one.  It was a quick half-an-hour, but ended with him complimenting my work and the Peace Corps as he gave me a Chinese fan as a present! 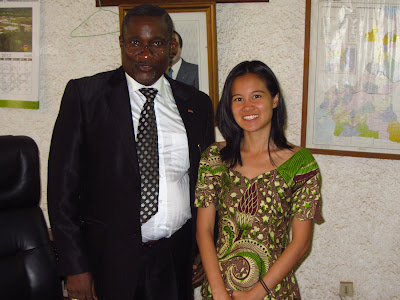 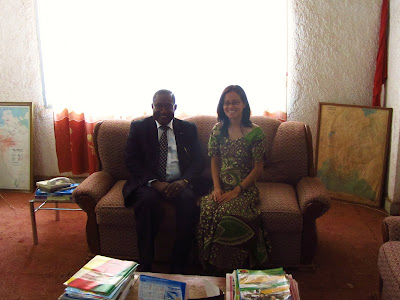 The Governor of the Adamawa and me in his official office 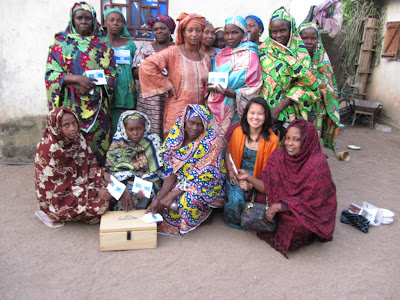 One of the projects discussed during our conversation involving a women's micro-credit cooperative that I organized.  In their first year, they received a 20% ROI!
Posted by Krystina Nguyen at 15:09 0 comments

And What Didn't Make News Headlines...

This story won't make the major news broadcasts tonight nor will it be written about in any newspapers. Even though a cyber cafe can be found down the street (very rare in general in West Africa), the most coverage this story will get will be this lonely blog post, lost amongst millions of personal blog posts worldwide.You see, the Petite Marche ("Small Market") burnt down last night. At 11PM, a gas tank accidentally exploded in the Jolie-Soir neighborhood of Ngaoundere, Cameroon. I know this because I live down the street from it all. There were motobikes and police cars going to and from the market; my friends called to see if I was okay. My home is made from cement, so there was nothing to worry about...for me at least.While I was with the wife of a traditional chief today, she told me that her husband's friend had lost everything in his boutique. The African fabric, the luggage, and the products that were imported. Muslims here don't have bank accounts or insurance, another friend says. People have been afraid of banks since the financial crash of the 1990s. Every time a microfinance institution closes due to insufficient loan reimbursements, all the clients lose everything. He had hid his life savings underneath the boutique. Everything burned with it.My best friend Dali and I went to see whatever remained of the market. I looked for the guy that I buy my soccer jerseys from. Was he here? I would have no clue; his boutique has vanished. Merchant that I bought shoes from last week? Nowhere, nothing. 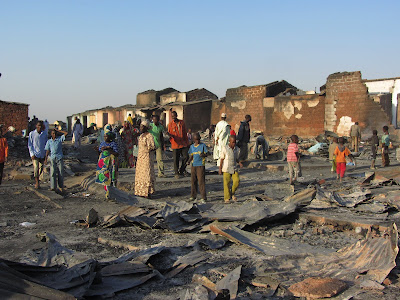 The mommas selling vegetables are still there as well as the butchers. They were untouched. The part that burned down is the "Beverly Hills" section of the market - the boutiques that sell the most expensive products in the city. Ironic right? Dali tells me that some people lost over 15,000,000CFA (~$30,000US). The World Bank estimates that the average income in Cameroon is just over $1100US. 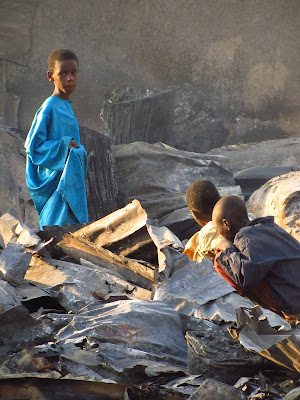 That's just an estimate though. Wikipedia also estimates Ngaoundere's population to be 200,000, but all the locals tell me it's around 400,000. And if you ask the locals how many boutiques were lost, you'll hear estimates of varying numbers. That's how everything just is here sometimes. Guesses, uncertainty. 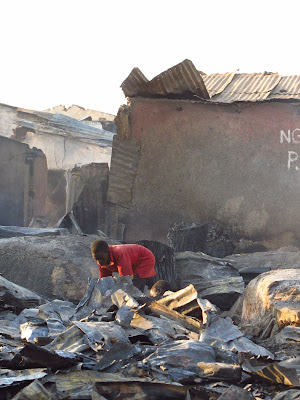 The kids are digging through the ashes for coal to cook with. They aren't really aware about what's going on. But then again, who really is? 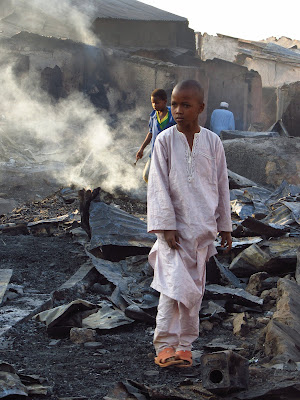 Daily Life in the Peace Corps: Where Everybody Knows Your Name

I spent the afternoon in the village of Beka Hossere just 5km outside of Ngaoundere. With a population of 3,000 people who have all been here for years, it really is the kind of place where everybody knows your name.My postmate, Cyrus Suleman, and I started the Beka Hossere youth group's first savings meeting. Two girls saved 100CFA a piece, the equivalent of saving $.20US each. The group members applauded before going outside and doing what Cameroonians do best: dance! 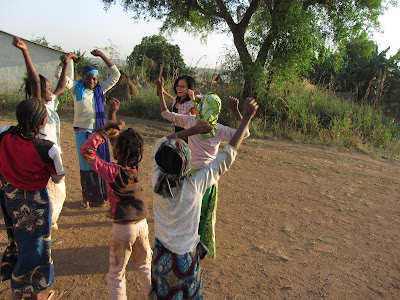 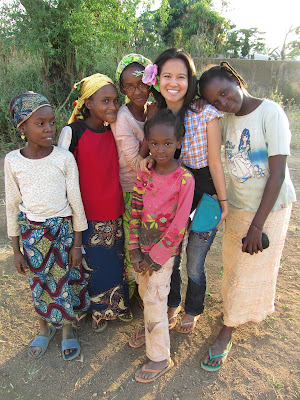 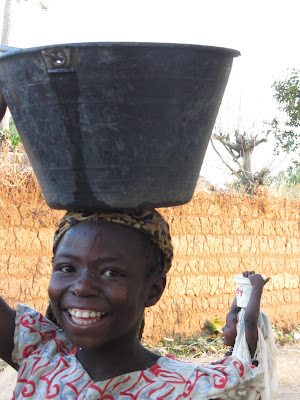 Awesome function on my camera. It records a couple seconds before each picture is taken. And no, I don't really dance like that!