Final Push in Chicago....P.S. Sleeping in an Airport is Not a Good Idea

Said goodbye to our sketchy hostel this morning and dropped our stuff off downtown at Mr. Gary Lee's apartment downtown. Headed down to Navy Pier (not quite as romantic as Santa Monica Pier in Los Angeles) to catch a boat cruise. We actually missed the tour with a jazz brunch; however, we ended up catching a 45-minute boat cruise for only $15 (And that is why I tend not to plan things out!) 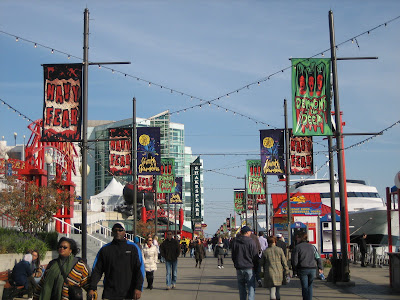 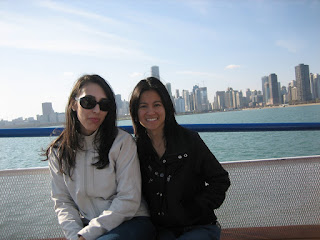 Boat cruise overlooking downtown...
After the Pier, we visited a true hidden gem: The Chicago Public Library! No, this is actually NOT where one rents books, but rather a cultural center for the arts. Inside the "People's Palace," the Chicago Cultural Center features over 1,000 programs and exhibitions each year. Best of all, it's all FREE! 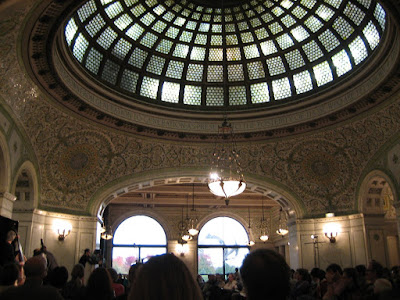 The Chicago Public Library
Veronica and I found ourselves inside the beautiful arena walking from room to room. One exhibit consisted of the most remarkable yarn artwork; however, my ears perked up when I heard in the distance....JAZZ!

Oldies, but goodies, the band played a more classic-mixed-with-fiddle kind of jazz. The two of us got lost in the moment...

Afterwards, we grabbed our luggage and rushed to Andy's Jazz Club (yes, I love jazz, can't you tell?), the supposed "best jazz in Chi-town." We wanted to spend some time here before heading off to the airport to try to grab a standby flight instead of taking the 6AM the next morning. 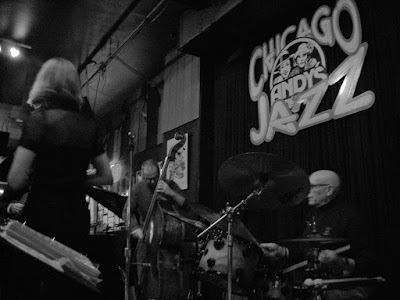 After only about half and hour, we had to go! Unfortunately, we got to Chicago O'Hare only 30 minutes before the last flight and they said we couldn't go on standby because standbye only works on same day flights. Damn.

Not wanting to pay for a hotel, Veronica and I toughed it out and decided to sleep at the airport! It was cold, employees actually moved the bench I was sleeping on, and it was ridiculously uncomfortable. When asked for blankets, we were told there were none. On a mission, I set out to find these non-existant blankets and voila! Behind an empty counter there were bunches. With my IPOD on, I salvaged whatever sleep I could get.

NOTE: I WILL NEVER SLEEP IN AN AIRPORT AGAIN. Even at my favorite one, all I wanted was to be home in my bed with my huge comforter!
Literally landed and had the shuttle drop me off at my car and straight to work! Oh, power traveling! 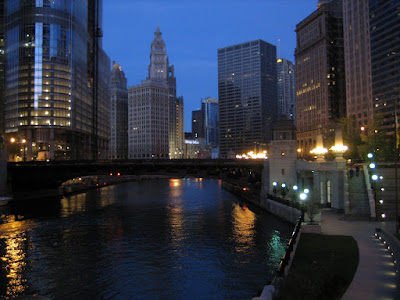 Chicago and all its beauty...

Posted by Krystina Nguyen at 02:59 0 comments

Chicago has too much to experience, so only with a weekend here, Veronica and I power-traveled all over this city!

We took the train downtown to start off at the must-see in Chicago: the Sears Tower! The tallest building in North America at 1450 feet, the building obviously provides a magnificent view! 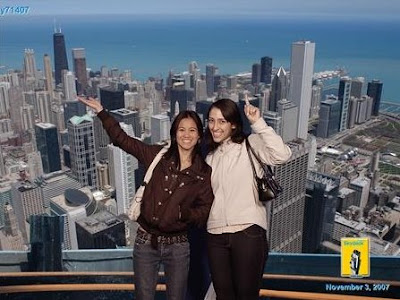 Standing in the tallest building in North America!
Tip: Walking around downtown is nice as there are lots of good photo-ops. 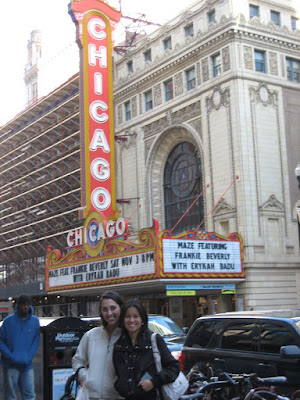 Outside the Chicago Theater. Classic pic!
We ate at a BJs (sometimes food from home is just nice) before heading off to Millennium Park. With world-famous architecture and statues, the 24.5 acre park provides more than a fair stroll for tourists and locals alike. 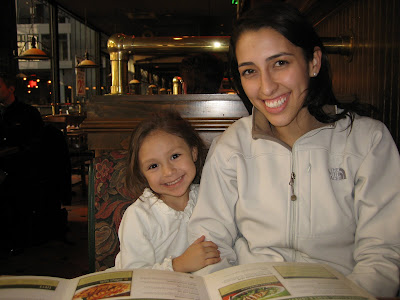 Random kid that ate lunch with us! Emily's adorable! (not pictured: Parents off to the left). 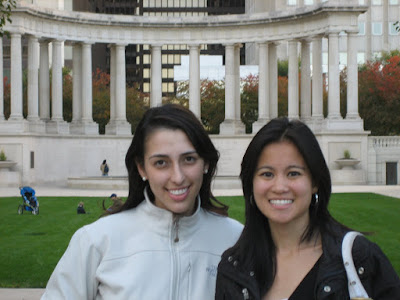 Some people call it a "bean" or a "peanut" but actually probably the most famous Chicago icon is "The Cloud Gate." 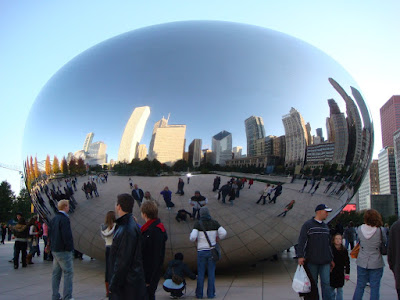 The Cloud Gate. Another dimension one would say?
The Art Institute is of course, beautiful. Small, but the works in it are fantastic. I especially enjoyed the photography exhibit by Richard Misrach entitled "On the Beach." 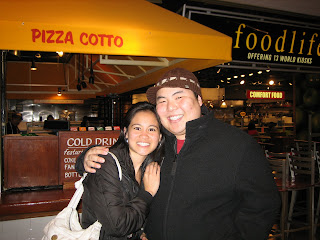 Our shopping consisted of going down Miracle Mile and then visiting the Water Tower Place, an 8-story mall, on Michigan Avenue. It's no Mall of America, but damn, it's still great! There, we ate pizza with the one and only, Mr. Gary Lee!

The train was still under construction, so we took the bus down to Wrigley Field. I hate maps because I used to not be able to read them, but after travels after travels, you must learn to love!

Lincoln Park has a great nightlife, but beware: you must be 21 and they are strict! Speaking my talk, I was only able to get into about 50% of the bars, but hey, we were still able to hop the hop!

Tip: If you are underage and would like to get into bars, the best places to try are Irish pubs--they really just don't care!

Nice job, Chicago! On to tomorrow!
Posted by Krystina Nguyen at 02:59 0 comments

Some of the best and most memorable travel adventures are the ones that happen spontaneously; for no other reason but "just because."

And with STA Travel providing flight deals of $200, we were off to Chi-town in about 3 weeks.

November 3rd
I leave my internship at 3ish and deal with traffic on a typical Friday afternoon in LA. Arriving at the airport at 5PM for a 5:30PM flight, I set off the security check and have to have a special inspection since I'm so late. Great way to start my weekend in Chi-town.

I arrive around midnight and meet Veronica at our hostel in Lincoln Park, Arlington Heights. Yes, a hostel in the States is NOT one you want to be staying at. Enough said.

We took a short walk around the neighborhood as it was right by the Children's Hospital. Eating at the local "no-name" diner (a term I use for the late-night diner where the food and service aren't great, but you're so hungry that you just don't care), we got our taste of Chicago and its hospitality. Hmmm....normal! Off to bed before a big, busy day!
Posted by Krystina Nguyen at 01:59 0 comments