A Taste of Austin

After a quick night out in Dallas's Lower Greenville, Chris Wu and I headed off to Austin! As he is a amateur chef and hearty "foodie" (matched by the fact that I will eat anything and everything), we made a detour to the small town of Taylor, Texas. There, we would bask in the deliciousness of Louie Mueller Barbecue!

Voted the "Official Best Barbecue in Texas" in 2008, Louie Mueller represents a meat lover's heaven! Slow-cooked brisket, hand-rubbed pork, and marbled rib-eye steak are just some of the choices for a mouth-watering meal. 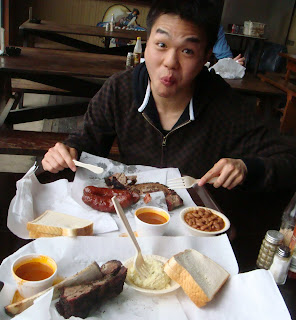 Brisket, rib-eye steak, sausages, and more! Mmm...
Be warned though! The spiciness can provide an intense experience!
Steps from the University of Texas at Austin sits the Texas Capitol at over 300 feet tall. The Capitol's architecture is of the Renaissance Revival-style, resembling much like the California Capitol in Sacramento! 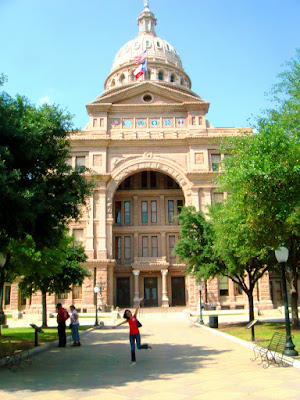 Visiting the Texas State Capitol
Tip: Swing by the Visitor's Center for a free map of downtown and to learn everything about the good ole' Lone Star State.
At a local happy hour at Cain and Abel, we were reunited with my backpacking buddy and Austin host, Lillie De Alba (see Greece and Italy posts in September 2008). After catching up, it was soon time to head off to the number one attraction in Austin: bat watching! 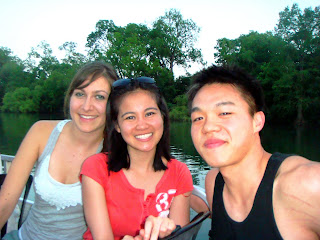 On our boat cruise waiting for the bats!
Every evening at sunset, up to 1.5 million bats fly out from under the Ann W. Richards Congress Avenue Bridge. As the largest urban bat colony in North America, it's a sight to watch! 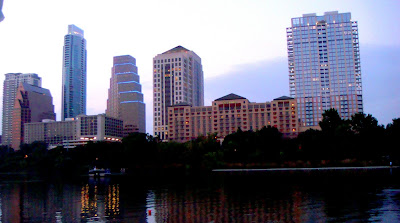 The little bats were actually kind of adorable in this traveler's opinion! And according to our tour guide, the endangered Mexican free-tailed bats feed on migrating cotton bollworm moths, thus reducing our need to utilize pesticides harmful to the environment. Though no current program is set up for the Congress Avenue Bridge, one can still adopt a Mexican free-tailed bat.
I apologize for the poor cinematography, but if you look closely, you can see the bats!

After cooking our lovely host a pasta dinner, we headed off to Austin's 6th Street. Interestingly enough, 6th Street highly resembles Bourbon Street in New Orleans. Thus, further proving my belief that the world is more alike than we believe.
We spent the night hopping from Spill to Shakespeare's to Maggie Mae's to the Library. With plenty to do, Austin sure provides a fun time for any traveler!
Posted by Krystina Nguyen at 23:59