Columbus Day weekend called for a quick trip to Connecticut to visit friends. Jamelle Nelson and I met at Washington Square Park in New York to take the 90 minute train ride to New Haven. A surprisingly great tourist destination, a young person can find lots of adventure in the "Constitution State."

After yesterday's drinks at Geronimo and attending an 80's-themed party with future lawyers at Yale's Graduate Professional Student Center (yes, you read that correctly), I dropped my graduate school friends off at the Goldman Law School Library and headed off to East Rock Park. 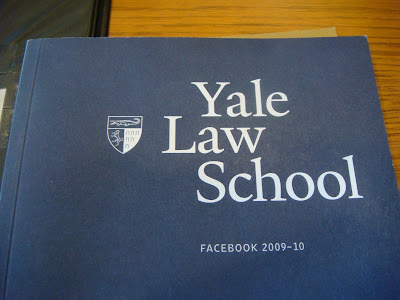 The original Facebook at Goldman Law School Library..in print!
The thirty-minute walk to East Rock Park provided quite scenic as this weekend marked the transition of summer to autumn. In other works, the leaves were in the midst of changing colors! 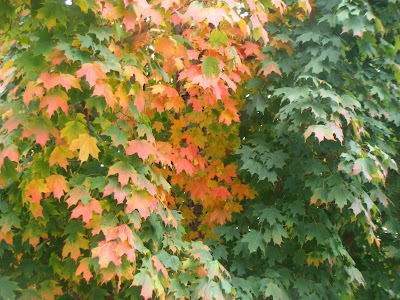 Time for autumn on the East Coast!

The tranquil getaway allowed one to escape everything but the stillness of the lakes and the breeze of the wind. The 425-acre park provided numerous surprises consisting of owners and dogs diving off bridges to models and photo shoots with red mustangs! After an hour or so of hiking, it was off to a contemporary art gallery! 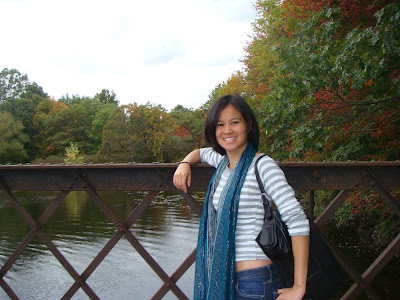 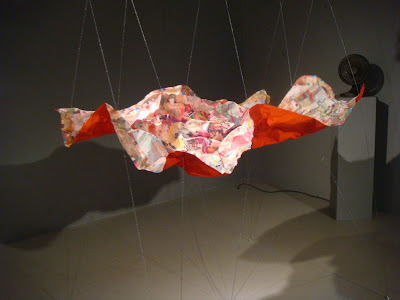 Martha Lewis's Plan B. She describes the work as "a magic carpet of sorts that is either a utopian dream or a dire escape plan"

Upon returning to Yale, I stumbled upon hundreds of Yale students running as police manned the nearby streets. A student claimed to me that they were in the midst of Bladder Ball. Previously played between 1954 and 1982 before being banned by the administration, the premise involves each respective residential college trying to attain possession of a giant six foot inflatable ball. Obviously. 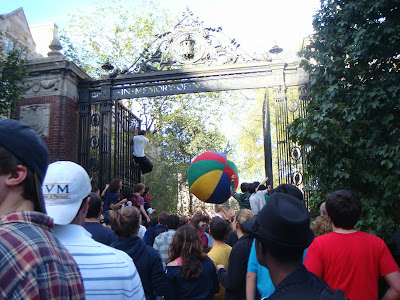 The forbidden game of Bladder Ball! Notice the Yale student hanging off the fence.

While waiting for the others to finish up studying, I headed off to Downtown New Haven a.k.a. The New Haven Green. Completed in 1638, the 16-acre park belongs to five descendants of the original settlers of the green. The appointments are life-long and once one member passes away, the others gather in private to choose a new co-owner. A story much appropriate for an Ivy League college town! 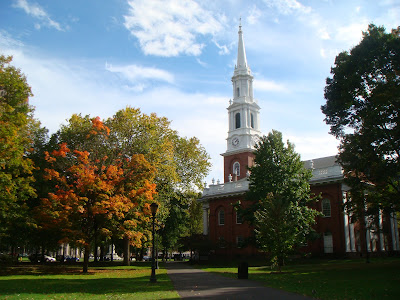 Last up in New Haven was a visit to Long Wharf Pier, home of the Amistad - too bad the Amistad was M.I.A.! 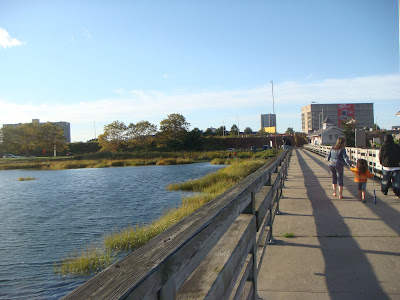 The night came with helping my host, Matias Sueldo, put about seven holes in his wall to hang an oil painting (it looks good if I may say so). We then headed off to dinner at Frank Pepe's Pizza, famous for white clam pie.

Note: White clam pie is not a dessert, but a cheeseless pizza. Why do they call it that? No clue.

Let the exploration in Connecticut continue!
Posted by Krystina Nguyen at 17:59