My women’s group canceled today, but it was nice to enjoy a relaxing day off…or so I thought that would be the case.

After giving PCV Nick Bourguignon information for a PC project, he assisted me on the mission of finding varnish for my bookcase. Yesterday, I inquired my buddy for the price of varnish: 2,000CFA a litre for a new can. Only needing about a fourth, we went to the carpenter next door to see if we could just buy his already opened can varnish. He wanted 2,000CFA for just a fourth! Moving on… 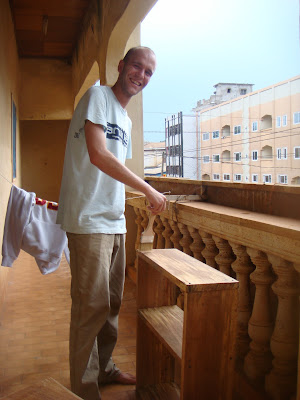 The second carpenter wanted 2,000CFA again! He said that he paid 4,000CFA and I said that he needed to go down the street and buy the 2,000CFA a litre that my buddy sells. Finally, a third carpenter gave me the normal price of 500CFA.

While celebrating our victory, we took the bookcase out to my balcony to begin varnishing. As I went back inside some time after, the balcony door got jammed (of course, our cell phones were inside and the spaghetti was cooking).

In the next hour: a PCV rode by on a moto and thought we were waving hello instead of waving for help, a random Cameroonian got lost trying to PC office, my neighbor who knows me couldn’t make out anything we were saying as the CD shop next door was blasting Nigerian pop. Finally, my neighbor found a ladder, Nick climbed down, AND the spaghetti was saved! 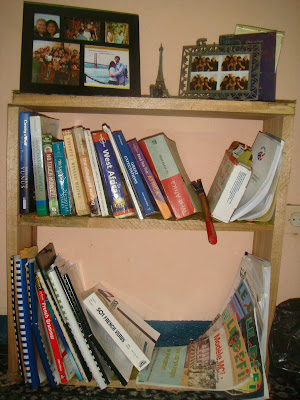