Mount Cameroon's Marathon: The Race of Hope a.k.a. 26.2 Miles Up a Mountain

The Race of Hope is a marathon up Mount Cameroon in Buea, Cameroon. Each February, a few hundred runners ascent 26.2 miles up and down the 10,000 foot volcano in search of challenge.

I’ve run three Los Angeles Marathons, but typical American marathons don’t compare to the Race of Hope. During regular marathons, there are thousands of people supporting you. It doesn’t matter if it’s Mile 12 or 22, there will always be someone cheering you on perhaps by name if the respective marathon prints it on your running bib. In the Race of Hope, there are spectators for the first 6 miles or so, and then it’s just you and the mountain.

American marathons have bands playing at major intersections, fifth-graders giving you Gatorade, and porta-potties serving as life-savers. I even had a Verizon wireless volunteer run next to me and dial my parents’ number while I said hello after a mile mark. Take all that away and it’s just crazy you running up a live volcano. 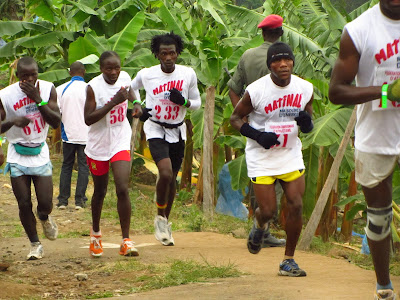 So it was one of the best decisions that I made to come watch as a spectator because I like marathons, but I don’t like mountains. At 6:30AM, a fellow Peace Corps buddy and I headed to Upper Farms to scout out a great rock to sit on while watching the race and cheering on our crazy friends that were running the relay.

The Race of Hope has a relay portion in which three people split the race: Person A will run to tag Person B who will run to tag Person C. Person C will run up to the peak and then on the way back down will pick up Person B before they both pick up Person C. If that doesn’t make sense, just know that all three runners meet back up to cross the finish line together! Originally, only men were allowed to run the relay, but thanks to Peace Corps Volunteer Zachary Drefus, this was the first year that women could run the relay as well! 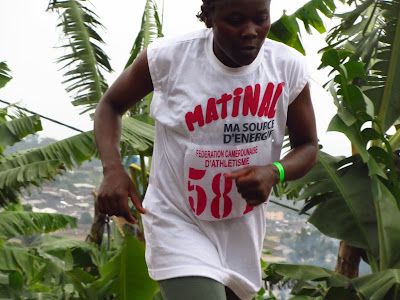 Upper Farms (the bottom base of the mountain) was a huge block party! Hundreds of people came to watch the marathon while meat got cooked, music was played, and drinks were had! Mind you, this was 8AM in the morning! 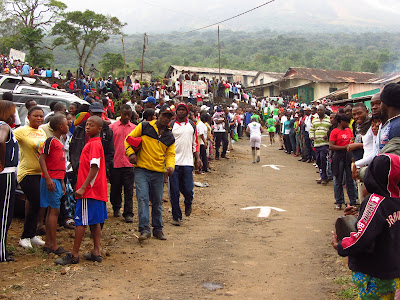 Perhaps the most inspiring and innovative part of the race this year was that blind and visually-impaired runners from the Buea Rehabilitation Institute for the Blind (aka Bulu Centre for the Rehabilitation of the Blind) were accompanied by their family members or volunteers up and down the mountain for the 10k race. Even a 10k up this mountain was crazy as there are parts where you physically cannot run and are forced to walk because it’s so steep. Way to go! 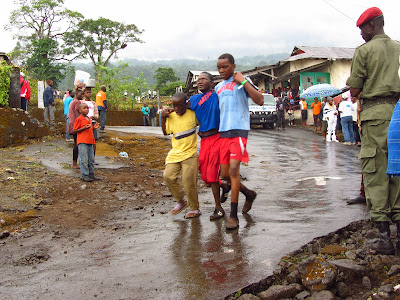 As the rain came down and we huddled underneath the prison awnings (Upper Farms is Buea's prison center and ironically, where most people wait to watch the Race of Hope), the crowd immediately roared! It was nobody else but "The Queen of the Mountain" Sarah Etongue. Seven-time winner of the marathon, everybody came out to see her as after the moment she passed, 3/4 of the crowd disappeared! She didn't win this year due to sickness, but her legend easily continues. 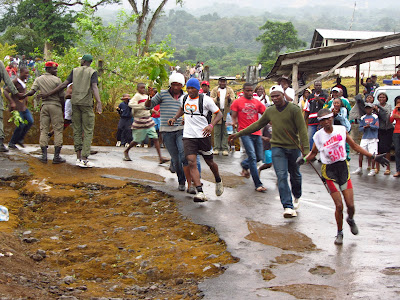 We soon learned that they eventually stopped letting people summit because the conditions were too cold to run in. Yes, nothing like the sunny marathons I took part in while in Los Angeles! 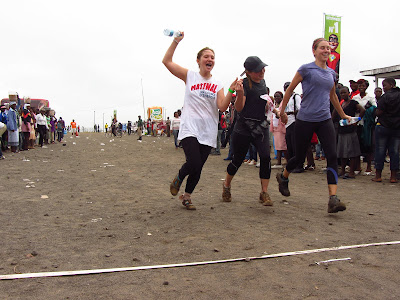 That night we celebrated our friends' achievement with an all-you-can-eat buffet of chicken, fish, vegetables, and surprise crepe desserts at Cuisine Royale. A great race and a great day!

*For those interested in learning more about the Race of Hope, please see the documentary Volcanic Sprint.