﻿Recently while I was Googling "Things to Do in New England," one of the most popular activities that came up was...dog sledding. Though no native-born New Englander I know has ever been, how could one turn down this opportunity during a winter with record-breaking snow?

Upon arriving at Muddy Paws in Jefferson, NH, we could hear the barking begin!  A tour (i.e. two other people) were in the midst of leaving for their run and the dogs were more than excited.  According to our musher, the dogs barking are the equivalent of them asking, "Pick me! Pick me!"  They are second-chance dogs, which means they have been rescued or were former race dogs (including dogs that have competed in multiple Iditarods!). 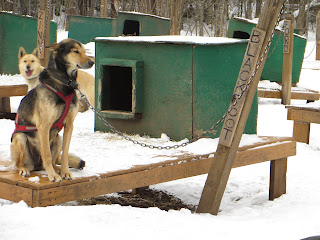 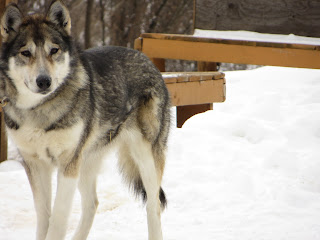 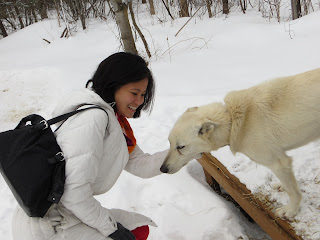 Playtime with the dogs before the run. Muddy paws definitely showed up on my white jacket!

After some play time, we harnessed up ten Alaskan and Siberian huskies to begin the run.  As we waited in the tobagan, I couldn't have imagined the pace we would have hit.  These ten dogs were pumping their little legs to carry three adults to the point where some turns gave us air!  Off through the New Hampshire woods we went for a little over an hour taking just a few rest breaks in between (for the dogs of course. My friend and I were doing nothing more than holding the blanket that rested on top of us). 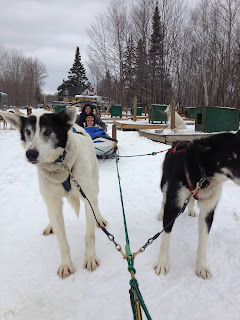 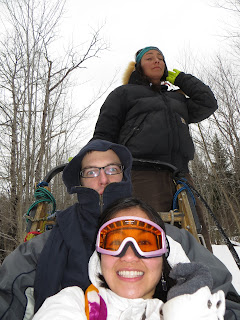 Happy and warm (sort of) in our tobagon

After a perfect dog run, we headed of to the small (very small) town of Whitefield, New Hampshire to The Lion and The Rose Bed and Breakfast. It was as if Robin and Chris had been waiting for us as the door opened up for us at arrival.  Their elegant Victorian home was a wonderfully warm on a cold, winter day (and yes, it has multiple hot tubes!).  It was my first time at a B&B and I must say if the hospitality and comfort is like this, I will be staying at them more often! 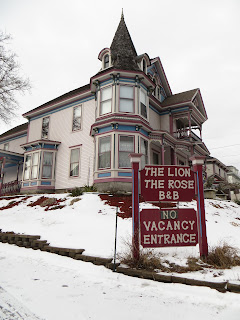 The next day before the 3.5 hour drive back to Boston, we stopped by Mount Washington Resort located in Bretton Woods of the White Mountain National Forest.  Ziplining tours are offered year-round - yes, that also means ziplining during the winter!  Being single-digits degrees out, we decided to forgo the 3+ hour tour and prompted for one quick run down the Williwaw Racing Zip for $15. Ziplining in the snow?  A very, cool (literally!) experience that lets you race your partner!

After a quick 30 minutes of snowtubing, it was time to head home to beat the snow storm.  See you next winter, White Mountain!
Posted by Krystina Nguyen at 23:59