And That's How We Met the Mayor

It was a rushed morning as I woke up at 10:07AM when I was supposed to leave at 10AM! With the November 4th Presidential Elections approaching in the United States, I ran to drop off my absentee ballot before taking the bus to Massy Palaisseau.

Pauline would be joining me later, so I slept on the train during the two hours to Lyon. We were on our way to the Rhino Jazz Festival which we had found online. I had heard (or thought I had heard) of it before, so I imagined that it must have been huge!

Note: Have your passport on you if you have the Eurorail pass! They usually never check, but the pass is only technically good with a passport.

Upon arrival, I felt like I was back in my study abroad program: out in the middle of nowhere! The train station attendant had NO clue as regards to the Rhino Jazz Festival nor did Rive de Gier have a tourism office. Thus, the attendant gave me the name name of one (and only) hotel in the city: the Renaissance. Pauline and I found the hotel online, but they were originally sold out!

As I walked to the center of town, I found rhino-symboled banners and statues everywhere. Obviously, the Rhino Jazz Festival had to be huge! Ironically, none of the banners had any contact information whatsoever. 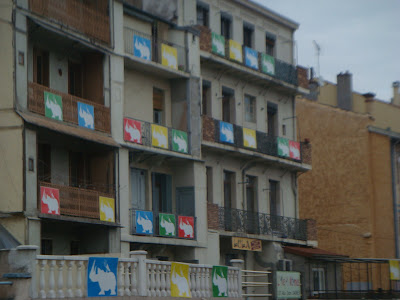 I see the signs, but where's the festival?
I ate at a small patesserie and actually found a Jazz Festival brochure next to the cahier stand. The owner gave me directions to the ticket booth (all in French) where we had previously made reservations on tickets.

The ticket booth actually had a rhino horn coming out of it, but was quite helpful as I received directions to the concert and hotel and paid for the tickets (again, all in French!). The old man offered to take me in his car the two kilometers to the hotel, but for obvious safety concerns, I politely declined.

I soon realized a few things that made the predicament quite difficult:
-We had no hotel for that night
-I really could not speak the language
-Nobody could really speak English in this small town
-I was probably the only Asian within a fifty kilometer radius

Hmm, what to do? At arrival to The Renaissance, they had no vacancies (in all five of their rooms). There were also no couchettes (couches) or chaises (chairs) we could sleep in either! Sigh...but they gave me information for another hotel in the next town over.

Pauline finally arrived and was able to call the other hotel. We found a taxi number as well as the buses stop running early in Rive de Gier (of course) and they would pick us up after the concert. Thus, we went to grab a beer and Orangina!

After picking up a panini at L'Hollandais, we headed up the steep hill to the concert! Thankfully, our trusty post-it note map the French ticket attendant gave me was pretty accurate! Thankgoodness the random Rhino Crossing Signs helped show us the way! 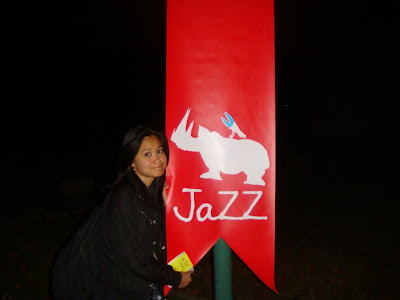 Another clue leading to the Festival!

After the 3km uphill climb, we made it to the top at Salle de Grange! It was dark, in the middle-of-nowhere, and many, many senior citizens. It was just the Rhino Jazz Festival I had imagined! Haha, my bad!

Nonetheless, the concert was amazing! The Hampton Vibrations consist of a four-man saxophone, a pianist, a guitarist, a drummer, a trumpetist, and a xylophonist! They all sand, clapped, and had energy as well as talent. Quite an entertaining performance!

The amazing and energetic Hampton Vibrations!

At intermission, Pauline started to speak to one of the older ladies asking what time the concert would end. Otherwise, we would have to call the taxi cab to pick us up later. When she discovered that our hotel was over seven kilometers away, she balked and actually found us a ride with another older woman!

Word travels fast around a small town and the locals were so surprised that two "Parisians (one of which isn't even French!)" came into town. Thus, a reporter decided to interview us and take our picture! Long story short, the next thing we knew, we were standing next to the mayor and shaking his hand for the local newspaper! Hahahah... 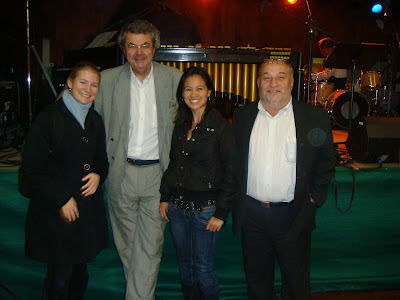 Just another day in meeting the mayor and the son of the oldest mayor in Rive de Gier (he worked for fifty years!)
The nicest woman gave us a ride to the next town to which the hotel front desk actually just left us our keys at the front desk. What a lovely, trusting, and beautiful commnity of Rive de Gier! 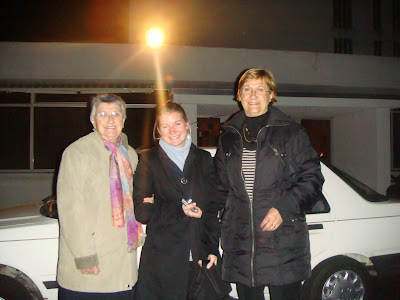 The kindest women in France!