We had a 7:30AM wake up call! I grabbed my Venetian mask and we were ready to go!

Note: The entire season of parades and festivities is known as Carnival. Contrary to popular belief, Mardi Gras is actually just one day, the last Tuesday...TODAY! 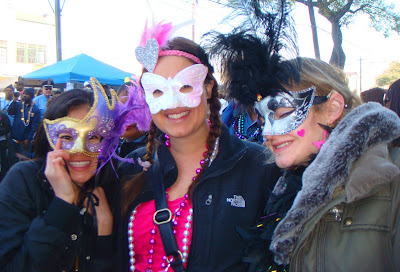 Our Venetian masks for Mardi Gras!
Out of all the kings, Zulu is the only one to be able to choose his own queen. The Zulu parade is favored by locals and tourists alike as during this parade, coconuts (a.k.a. "Golden Nuggets") are passed out! An older gentleman next to me copied the idea of holding a hat to get attention for beads and yelling "Hey, Mister Zulu!" - whatever works! He was so kind that he actually lifted me up to the height of the floats, so that I could get a coconut. I actually have a full conversation with the Zulu float person, yet he still didn't give me a coconut; it was harsh!

Even while sitting on Chad's AND Susy's shoulders, I managed to get stuffed animals and beads, but no coconut! We soon had the brilliant idea of putting a beer into the hat, and you guessed it! We scored a coconut for Susy!

Greg called and we met up with him at the Walgreens. On the way there, I asked an eleven-year-old to trade for some awesome New Orleans-specific beads that listed all the major attractions. He used my cell phone and I gave him a poker set strand.

We walked with Greg to meet up with his friends at Voodoo BBQ, voted the best BBQ in Nola. I asked the bartender for something non-alcoholic to which she responded, "Oh, honey, there's nothing like that here." Ahaha. 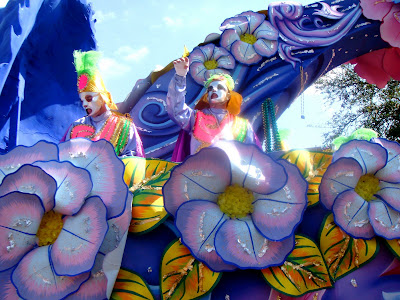 The Rex Krewe was the first to hold an outdoor parade and thus, led the way for the celebration of Carnival and Mardi Gras as we know it! They also started the tradition of giving away "doubloons," medals with the parade's emblem. At the King Rex parade, one of the Jersey boys complained that he couldn't get any beads. Low and behold, when he took my hat and offered a beer, we acquired an entire BAG full of beads, cups, a Rex baseball, and a stuffed animal. Love it!

The Rex Parade ended and we headed over to Brian Baskin's friend's house for a kickback. Best thing about meeting old friends of someone you just met? They can tell you all of the embarrassing stories! Ahaha.

We played Jenga for a bit and then Greg was gracious enough to walk me over half and hour back to the hostel and then back. Becky, Susy, Chad and I then grabbed dinner at the Garden Cafe and we soon found out that we had a birthday girl at the hostel. Thus, we took Rachel to Bourbon of course! 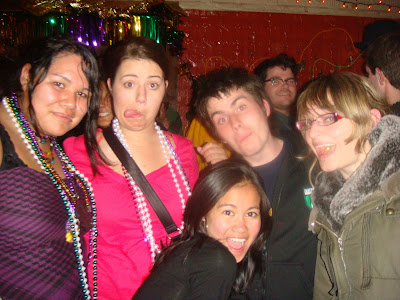 Everywhere we went, she shouted, "It's my birthday!" and she received beads galore! We then headed off to the Maple Leaf Bar from a tip from the people we met at The Spotted Cat. At arrival, the locals stared at us intently, but once I yelled "Happy Mardi Gras!", they were so welcoming!