Today we had an 8:30AM wake up call. Not too shabby as we received almost seven whole hours of sleep! We took the bus to our boat cruise with on the Lupita Trimaran catamaran.

Tip: Buses are great in the Hotel Zone! It's only 650pesos equivalent to approximately 50 US cents per ride!

The locals working in the tourism industry in Cancun love flirting with tourists as we soon learned! Most did seem to enjoy the work as well. When asked if the boat crew member loved living in Cancun, he simply pointed at the ocean and said, "Mama, look at my office!" 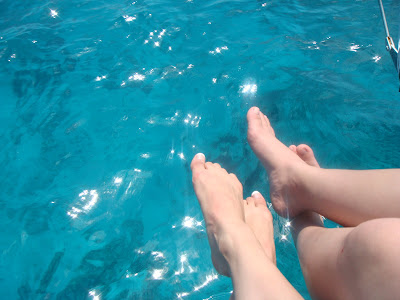 The crystal blue Caribbean Sea - no photoshop involved!
In the middle of the Caribbean, we went snorkeling! There were plenty of dory fish on the way to Isla Mujeres. We also passed by a dancing nudist boat to which our captain yelled, "Shake it, don't break it!"

Upon arriving at Isla Mujeres, we had the opportunity to hold a shark! Petting him was a bit scary though as the little guy liked to jump around! 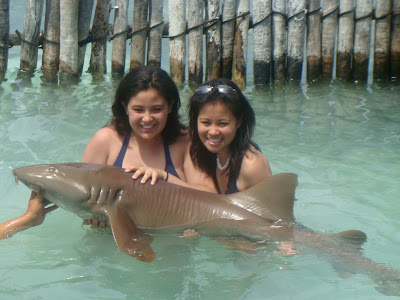 After lunch at the Beach Club, we jumped back on the boat to head to Downtown Isla for some shopping! At Pier 7, one could buy a seashell and blow it like a trumpet. After several unsuccesful attempts, even the local who was teaching gave up on me!

Ironically, some other Purdue spring breakers on the boat happened to be staying in the same hotel as us (207 & 210)! We actually met up with them for dinner at Chocko's & Tere where the buttered shrimp was amazing. I was originally drawn to the restaurant because of the lobster dressed in a tuxedo out front. One could actually sign the lobster and the entire restaurant as well - good marketing! 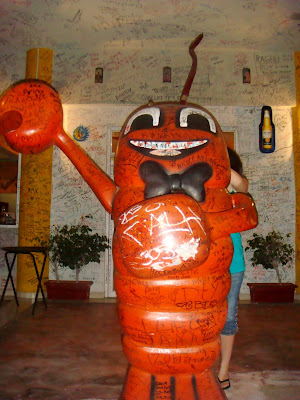 Signing the lobster at Chocko's & Tere

Later that night, we went on the Party Hopper tour that we had purchased before the trip. The Party Hopper tour takes each attendee to three different, popular bars/clubs. All night, along with about a hundred others, hoppers are taken care of and treated like VIPs. Our agenda that night: Corona Bar, Senor Frogs, and The City where Sean Paul would be performing!

In our group, there were a bunch of Indiana folk (of course!) and we met Ariel (his real name is pronounced "God") and Sagi who we stayed with over the course of the night. Our guide, Carlos, was fantastic as he would come up to us and ask what we wanted to drink. Even when I didn't ask for anything, he would bring water! Fantastic! 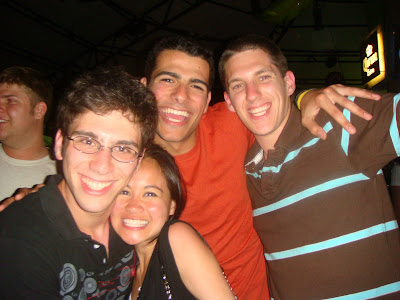 We then headed on over to the famous Senor Frogs! We sat out by the patio just talking and then back inside to dance! At City, we were VIP as Party Hopper reserved not only a room, but a platform. City was the largest club I've been to, much larger than CocoBongo. The show was unpredictable as lights would come down from the ceiling and giant balloons fell. Sean Paul finally showed and performed. 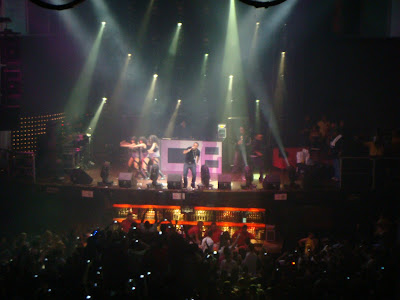 The City Club - crazy!
We walked Steph back to the hotel at 2AM and Sagi and I stayed out by the lagoon until about 6:30AM watching the sunrise! It was so relaxing to watch the sunrise and listen to the birds chirp with silence all around. Good stuff!
Posted by Krystina Nguyen at 18:59