Today would be the Chichen Itza tour. Although early, we were excited to see the Mayan Ruins! Over 1,500 years old, the Chichen Itza is the largest of the archaeological cities of the pre-Columbian Maya civilization in the Yucatan Peninsula.

It was a long two-hour drive, but the sleep and rest were well worth it! On the way there, we stopped at Cenote Suytun, a giant, beautiful sink hole! The sink hole is believed to be holy to the ancient Rain God "Chac". Those who were thrown in the sinkhole and survived were to be seers. Although I didn't originally plan on jumping in, it looked like too much fun! I'm glad I took the plunge! 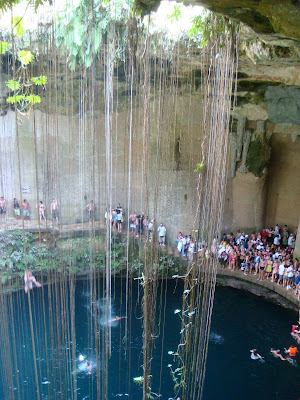 Cenote Suytun sinkhole. The water felt great!
Lunch was great as we watched a dancing performance and met some NYC girls. The Columbian woman sitting next to me tried the spicy sauce. NOT a good move as she had the same reaction as Steph did at Chocko's & Tere!

Note: Do NOT try the spicy sauce in Cancun. Your tongue will not forgive you.

Chichen Itza is considered the most impressive of all the Mayan ruins. The pyramid, "El Castillo," has 91 steps to the top! After a worldwide vote in 2007, El Castillo is considered one of the New Seven Wonders of the World. 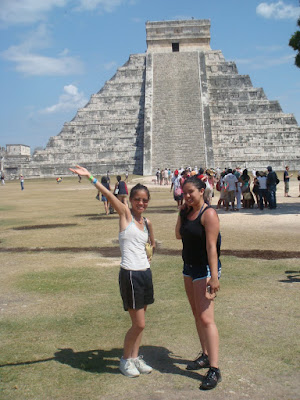 In front of El Castillo at the Mayan Ruins

At the Mayan Ruins, we met five boys Houston boys. Houston did hold a special place as that's where I spent my 21st birthday! While listening to the lecture, we bonded because we were all under the understanding that it was spring break! So, we started getting creative with our photographs such as cartwheels in the ball court! 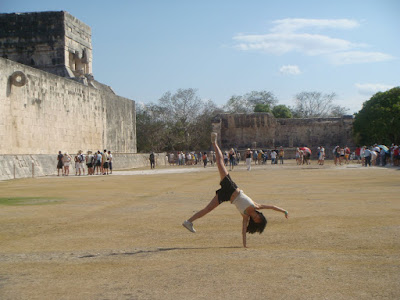 Cartwheeling in the ball court!

It was quite interesting to listen to the echos sound off the ruin's walls. When our guide whistled, the echo would bounce all around. We were also lucky enough to visit during the spring equinox! The spring equinox occurs when the sun lies directly over the equator. Equinox literally means "equal night" as the number of hours of night equals the exact number of hours of day. The Kulkulkan temple is the most popular spot to watch the equinox because the sun's shadows make a serpeant appear to slither up and down the steps of the pyramid. 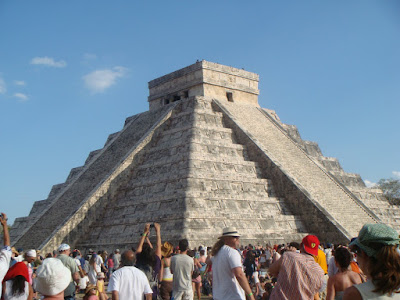 The spring equinox! Can you see the serpeant?

There were so many people ready to watch the serpeant appear on the pyramid. With the many cameras, it was like we were back in Pisa!

The two hours back were spent sleeping again. We relaxed a bit before going out to Dady Rock and Dady O's. We bought the Dady 'O Party Adventure package that included dinner, admission, and all-inclusive at both clubs. The waiter would even consistently come back to our table bringing us anything we wanted. Total VIP status!

At Dady O's, we used another coupon and got a t-shirt! And while dancing, beads were thrown to the crowd (do I really need more beads after Mardi Gras? Haha). Steph and I were dancing and all of a sudden I heard, "USC!" I paused a bit because I didn't realize who it was at first, but then it hit me when I looked at all five of them; it was the Houston boys! Haha. They cleaned up so nice with their collared shirts from the baseball caps and workout shorts I originally met them in! 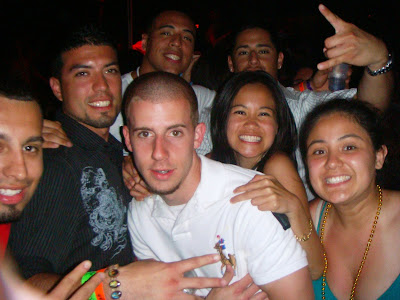 With some Houston boys
We spent the rest of the night talking to the H-town boys and bouncing between Dady Rock and Dady 'O. Time for home at 4AM. Thanks for the equinox, Chichen Itza!
Posted by Krystina Nguyen at 18:59