5 Things to Do in Lima, Peru

After last year's adventure to Ecuador, I was excited to return to South America to Peru, a traveler's top destination. After a night's sleep from a late night airport arrival, the day was spent exploring the capital city before heading off to Cusco for the one and only Macchu Picchu. If you're up for running around the largest city of Peru, here are five things you can do with a day in Lima:

Parque de la Reserva has easily become my new favorite place. More than a dozen fountains colorfully and even interactively light up a downtown park. Paid for by the Lima municipal government, the treasure of the night is the Magic Water Circuit (Circuito Mágico del Agua) in which water and light shoot into the sky against a background of music. Well worth the $1.50 admission and open after sundown Wednesdays-Sundays.  Truly magical! 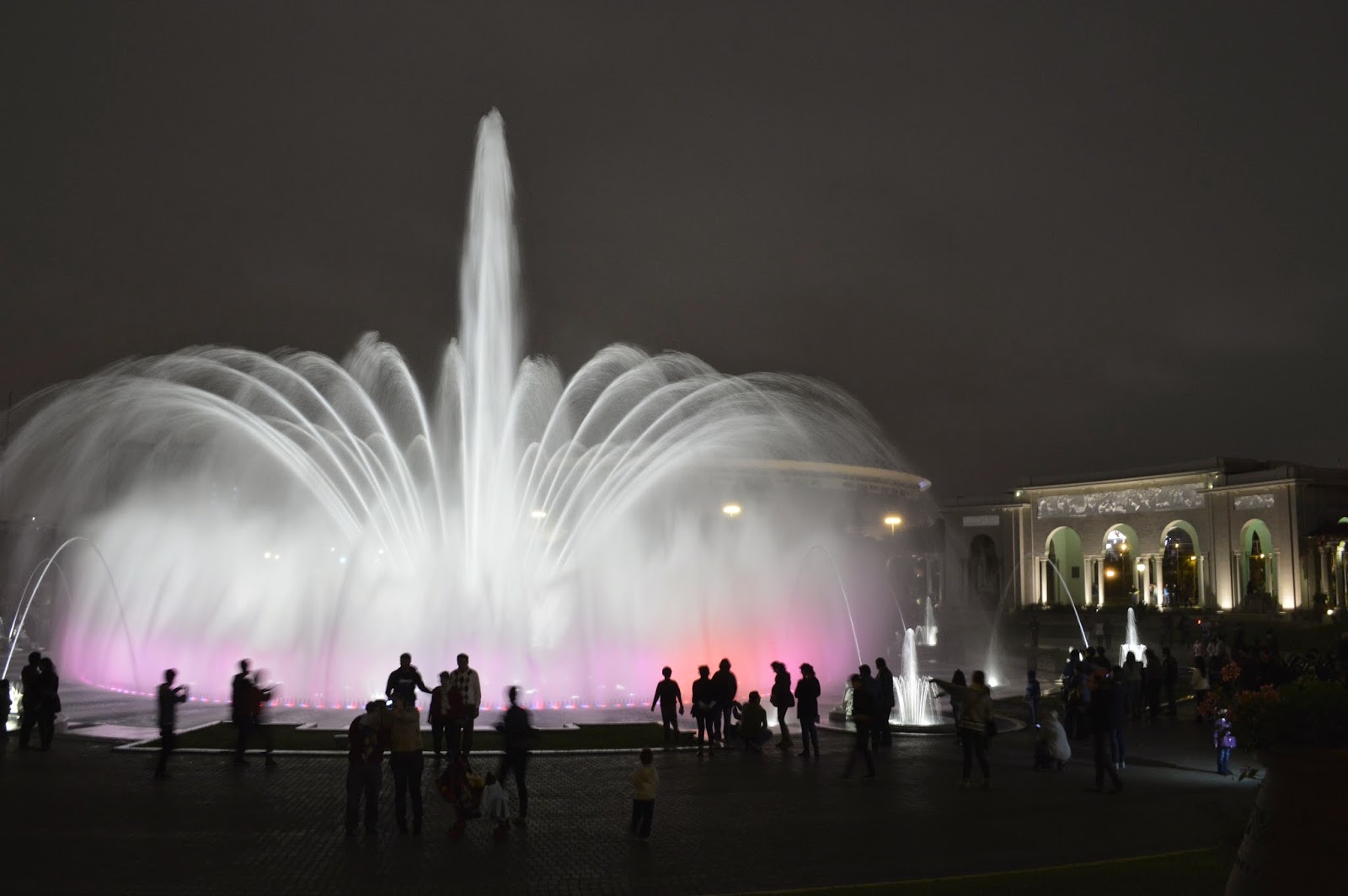 This one is for all the adventure seekers out there! At Parque del Amor ("Love Park"), you can grab a parachute and literally...jump off a cliff!  For ten minutes, you'll glide over between Larcomar, a multi-level shopping complex, and the Pacific Ocean. Most of the guides only speak Spanish, so good luck if you don't (I don't either!). The ride and a DVD with a few photos will cost 205 soles (~$70US). Do this at your own discretion...some may consider the ride a bit sketchy! 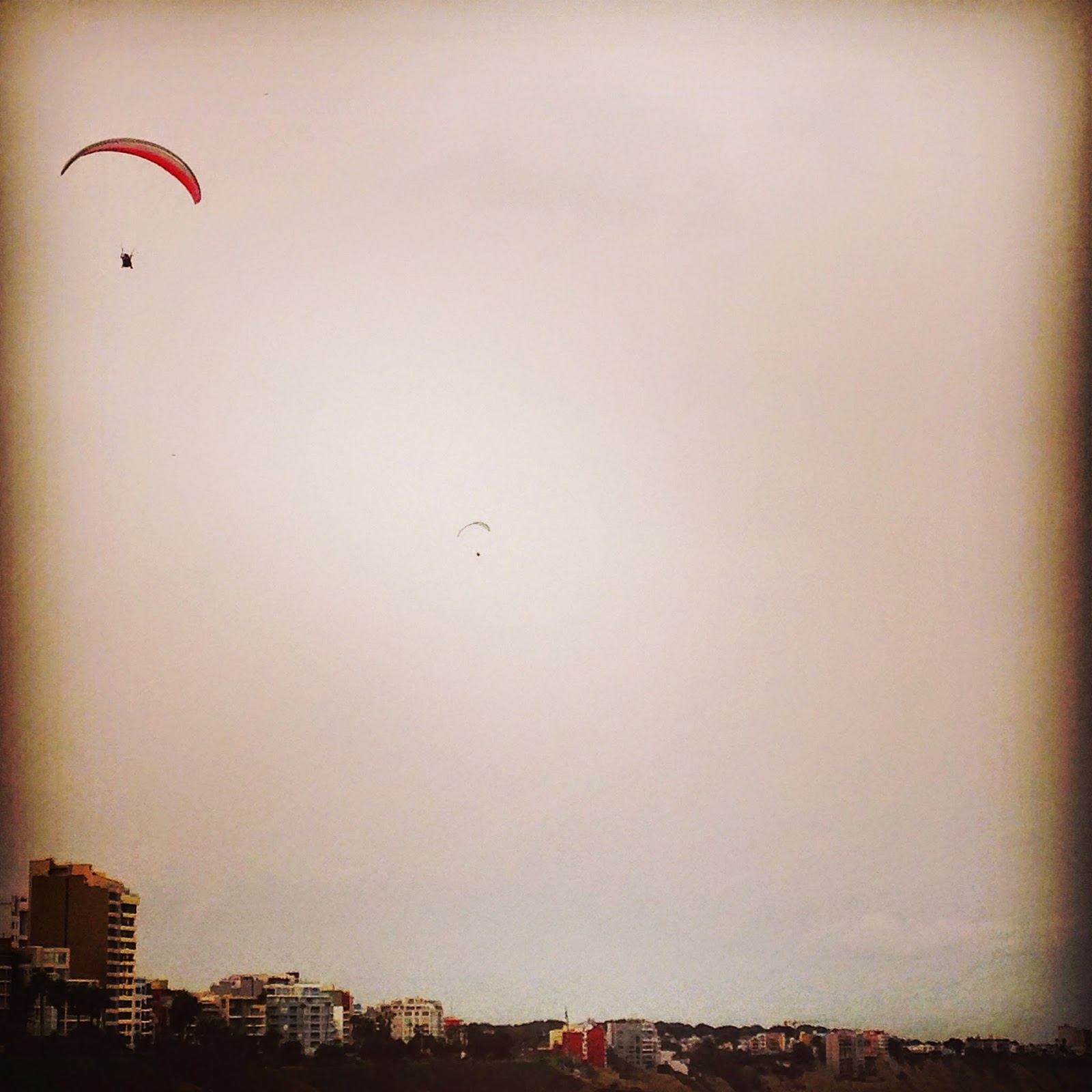 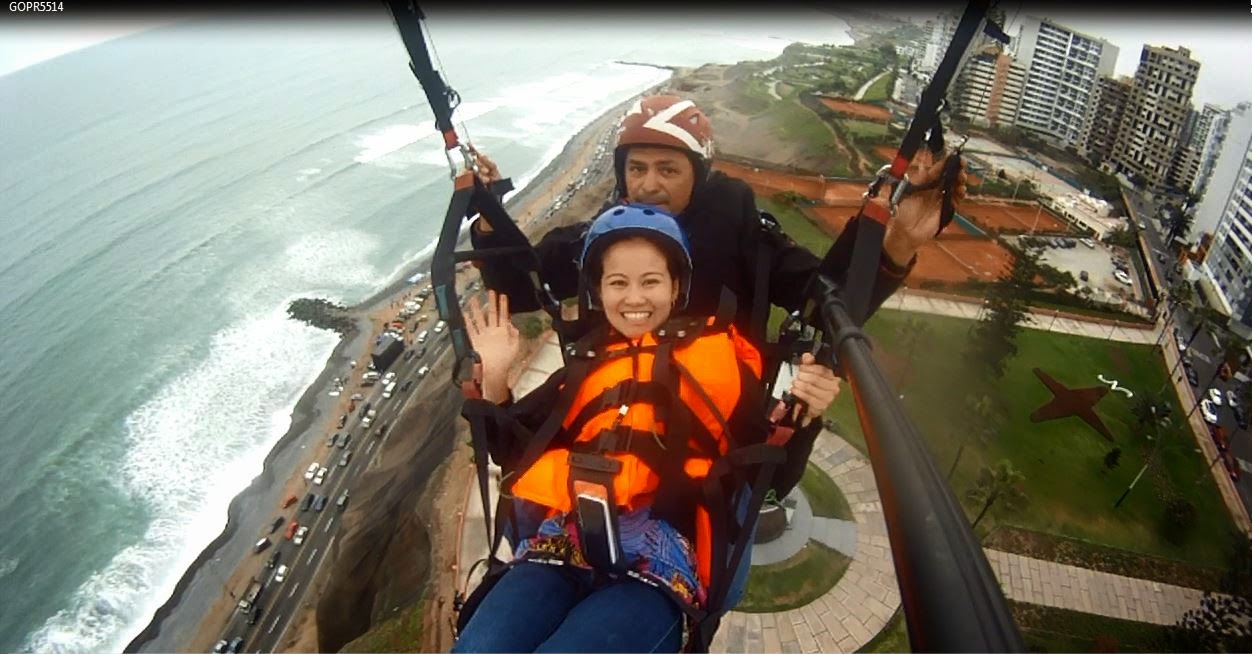 Paragliding over Lima. I'm much more scared that I look!

The Miraflores District is the upscale neighborhood of Lima know for shopping, gardens, beaches and flower-filled parks. Think of it as the Beverly Hills (I was lucky to have a friend living here). Take some time to explore Parque Kennedy, Miraflores' central plaza, with its regular flea markets and art exhibitions and if you're up for a night out, head out to Calle de las Pizzas ("Pizza Street") once the sun sets.

4. Walk Around the Huaca Pucllana Ruins

It's the greatest juxtaposition to be in a city standing on top of ruins from 200AD. Huaca Pucllana, Quechu for "a place for ritual games" is built from staggered platforms out of adobe and clay. The ruins served as an important ceremonial and administrative center for the Lima Culture Society with eventual use by the Wari Culture. If you bring along a student ID, entrance is only 5 soles (~$1.50US). 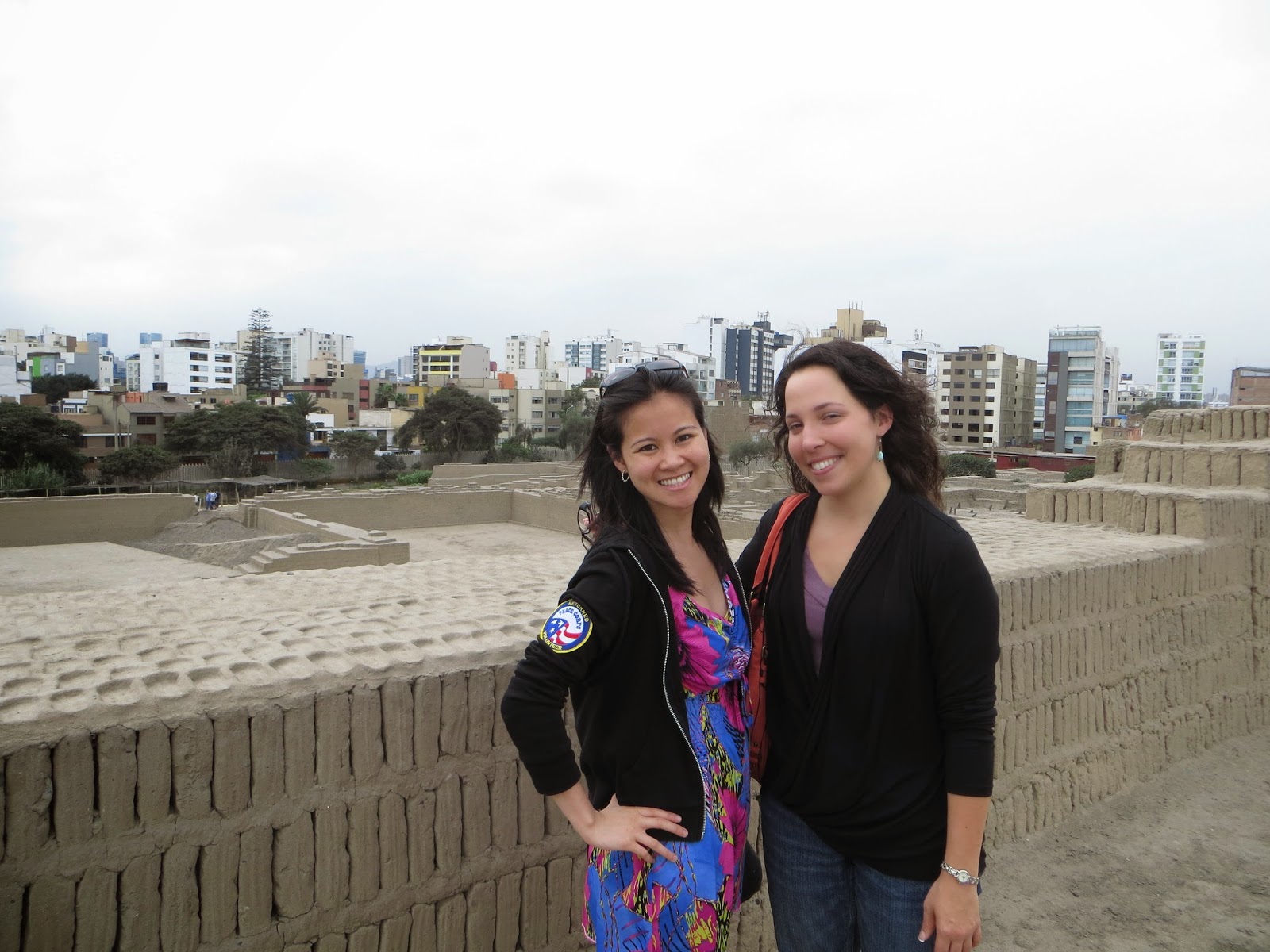 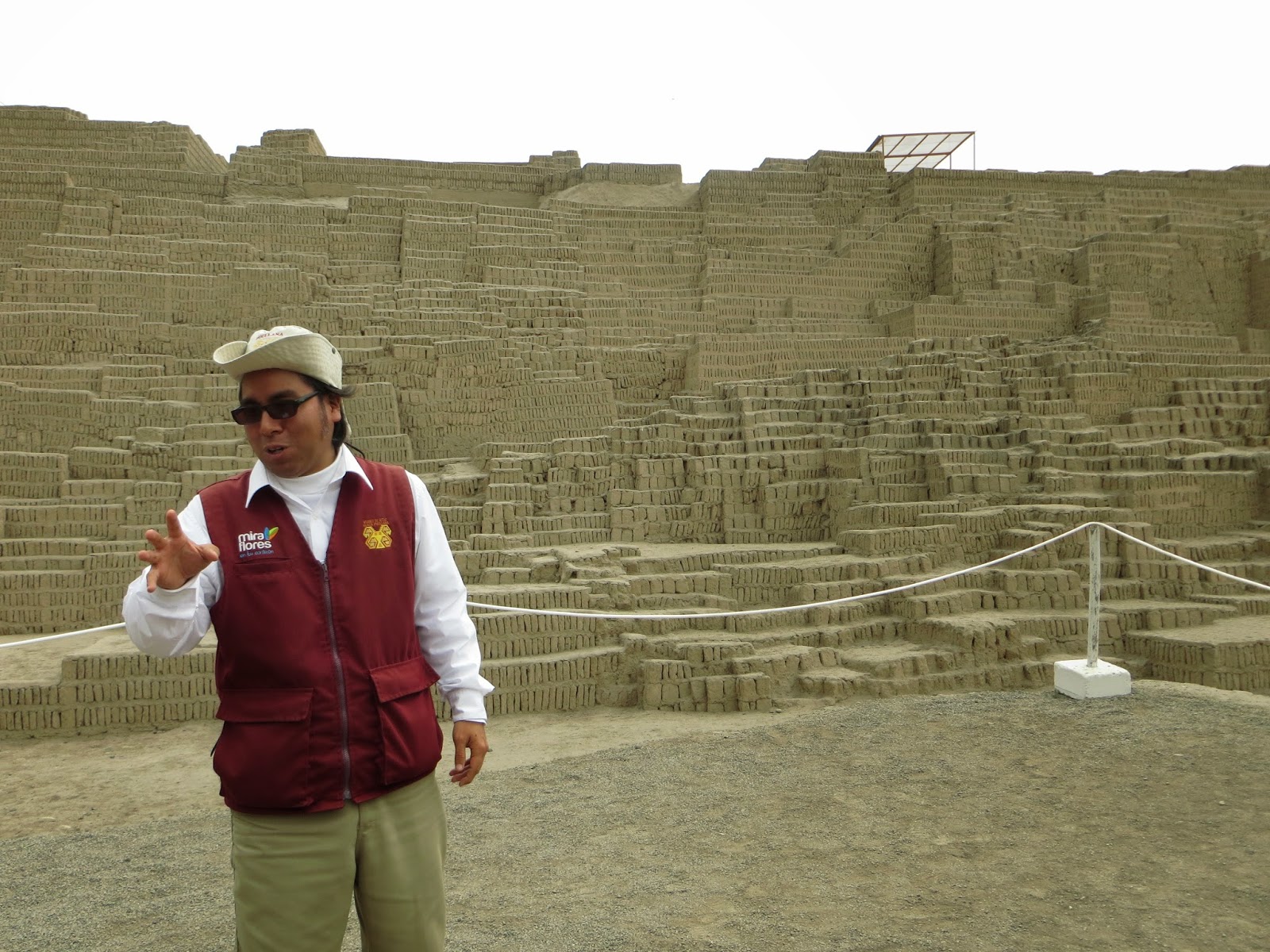 Monica Dykas and I take a tour of Huaca Pucllana

5. Visit the Museum of Contemporary Art

For a less touristy crowd, take a bus to the Museum of Contemporary Art. Though it only has 3 rooms, the current exhibition of the intersections between locals and tourists in Cusco proves a solid visit. Again, bring along a student ID as admission is only 2 soles (~$.50US). 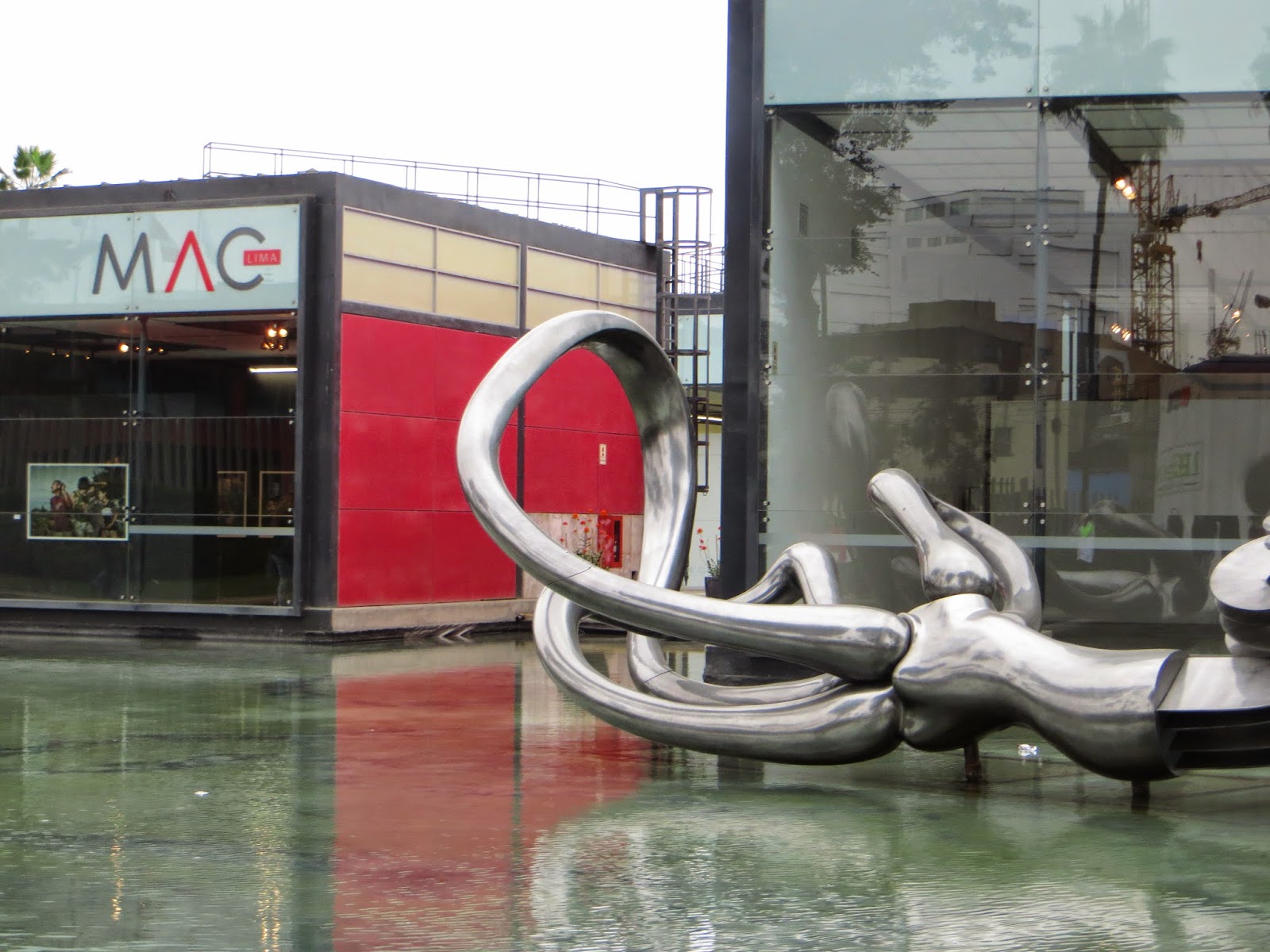 Lima's a great place to explore, so enjoy it all! What are your top five things to do in Lima?

Email ThisBlogThis!Share to TwitterShare to FacebookShare to Pinterest
Labels: Peru