Why Yes, Governor. I Will Take Your Cell Phone Number

One of the first official duties of a new Peace Corps Volunteer is to meet the officials in the respective village, town or city. Thus, Peace Corps provides formal letters to present not only the volunteer, but the other volunteers in the region. While some PCVs have only five or so individuals to meet, I had ten letters to drop off as I’m living in Adamawa’s regional capital.

Though the city has a population of 400,000 habitants, my community host Haouwaou apparently has a connection to everybody. Each Small Enterprise Development Volunteer has a community host which aides the PCV in everything Cameroon-related. Need to make furniture? Community host will take you to their carpenter. Need to work with a women’s group that only speaks the local language? Community host speaks three African mother-tongues. Need to find the offices of the officials and heads of states in Ngaoundere? Community host has a family member working at each one!

First stop was the office of the Police Commissioner. Surprisingly (though not so surprising as I’m learning as the weeks go on), after a ten minute wait, we were let in directly to see the Chief of Police. The Peace Corps name holds much weight, especially in Cameroon where we’ve been invited by the government since 1961. He was quite impressed with my work experience in microfinance and gave me his personal cell phone number in case I was ever in trouble in Ngaoundere.

We continued giving letters to the Prefet, the Commandant of the Gendarmaire, the Ministry of Small and Medium Enterprises, Ministry of Education, and Commissariats. It’s hard to exactly define the equivalents of these governmental positions in the United States, but meeting these officials are along the same lines as meeting the the mayor, city council members, and state officials if I were living in New York City for example.

The highlight of the day came as we were able to meet the Governor of the Adamawa. I thought that we would need an appointment or he would be too busy, but yet again, the Peace Corps letter has power! In English, he told us that he was glad that “such a partnership (between the U.S. Peace Corps and the Cameroonian government) existed because the Peace Corps aides with development at the grassroots level.” Yes! 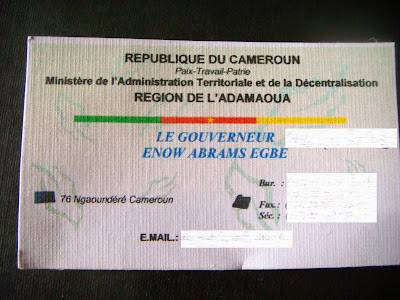 Governor's business card with his private number...just another day...

He further proceded to give me his personal cell phone number as he wants me to have extra security. Ae the end, he goodbye to and shook the hands of Haouwaou’s baby! Character!

Mingling with the political powers of Ngaoundere? Check. Now I just need furniture in my apartment.