While traveling by bush taxi on an unpaved and rocky road, I spent three hours in between my buddy’s legs as there were eight of us in the car (two people in driver’s seat, two people in passenger seat, and four of us in the back seat of the taxi)…sometimes you are pushed out of your comfort zone here in Cameroon. 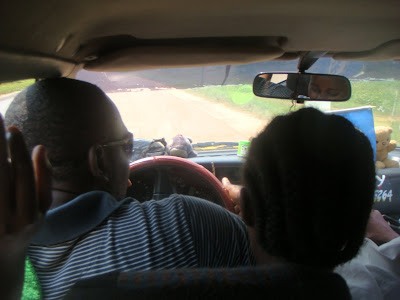 The travels of the day…

At 5:30AM, our bush taxi comes to pick us up and guess who pops out of the back seat? Our random medallion-wearing Cameroonian friend (see post below!). He says he is here to keep us safe and we are happy.

We travel for three hours by the bush taxi from the village of Mundemba to Kumba. Three hours was actually record time as the driver flew!

For one hour, we take an agency car (20+person caravan) from Kumba to the Southwest regional capital of Buea.

From Buea to Yaoundé (the country’s capital city and Peace Corps’ headquarters), we take another agency car for six hours. When we finally arrive in Yaoundé, we catch a taxi (which can take half an hour or so to find a taxi going your way).

By this time, it is 7PM, thirteen hours later, and we are exhausted

All this for 475 kilometers (less than 300 miles). I genuinely miss traffic in America.