So you're an American living in Africa. Crazy enough for most people. When you walk down the street, people will randomly yell "white person" at you (yes, even if you are not Caucasian). People I've never met will know where I live because out of a city of 400,000, I'm the only one that looks like me. As such, it's typical for a Peace Corps Volunteer to try to avoid situations that will attract even more attention as we constantly live in a "fishbowl."So when the high school teachers of Lycee Mardoch invited me to play in their 1st Annual Teachers vs. Students International Women's Day Soccer Match, what else could I say? Yes!Let's note that I used to be pretty good at soccer. Eight years of playtime including club tournaments and Varsity games make for a pretty solid foundation. However, the last time I played competitively was exactly eight years ago. Plus, this is Cameroon, the land of Samuel Eto'o and diehard fans. During the 2010 World Cup, shops would close as Cameroonians would huddle by the dozens around one television. Our Peace Corps training sessions would end early so the Cameroonian trainers could watch home games (albeit we worked through the USA games!). Soccer is life here, so to avoid complete embarrassment, I had to practice to step up my game!My training consisted of two hours of passing with my postmate, Cyrus Suleman. I got too busy to really practice and March is the beginning of hot season. Eh.Today was the big day. International Women's Day is tomorrow, so this week is chalk-full of activities. Throwing on my soccer socks, double-knotting my shoes, and applying sunscreen brought back elementary school butterflies before important matches. This time would be a little more intense as my teammates would be almost twice my age and the opposing team members would be almost half my age! And yes, I'd be the only American in sea of Cameroonians. 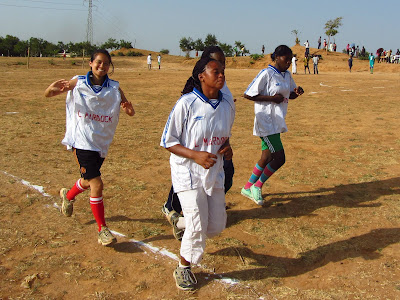 Warming up in my XXXL jersey
After never having met 7/8 of the teachers, they put me as starting right halfback. The whistle blew and it turns out that most of the women had never really played before, so the competition wasn't too tough! I kicked the ball
no more than a total of five times that first half, so I just ran around getting a good workout. The students scored a goal by the time halftime was called.But the second half I tell you! I was really confused on the new formation, so by the time we started, I wasn't really sure what my position was (or if I had one at all). So wherever the ball went, I went! While in the goal box, a student got fouled for a handball which led to the teachers scoring the penalty kick! A minute after kickoff, the teachers brought it together for a passing play and a great cross to where I was standing. With a terrible whack at the ball with my right foot, it was a GOOOOOOOOOOOAL! 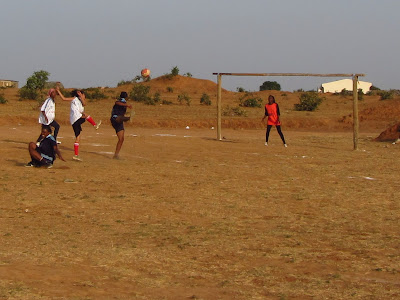 The winning goal! I promise my form used to be better.
The next school day was spent with everyone talking about the American's "magnificent winning goal!" As this was the first annual match, the Vice President told me that my legend would live on each year after. Going from fish in fishbowl to soccer celebrity? Cheers to that! 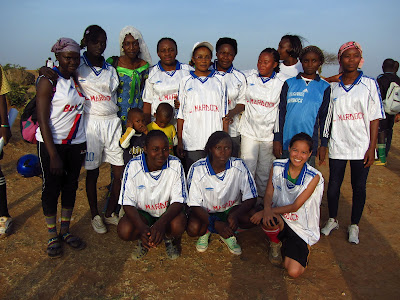 Winning team photo. Cameroonians don't tend to smile for pictures, but don't be fooled. Everyone was happy!