Foumban is unlike other cities in the West region of Cameroon. Predominantly Muslim, it is considered an art capital of West Africa. Founded by the Bamoun Kingdom before colonization by the Germans, the city is home to a traditional Sultan who lives in the Royal Palace.The palace itself is interesting though outsiders are only allowed to visit the small one-room museum on the second story. It is 2.000CFA/person, but if you are a history buff or interested in one of the few museums in Cameroon, the visit is worth it. Artifacts include traditional military outfits, swords, and pewter statues. 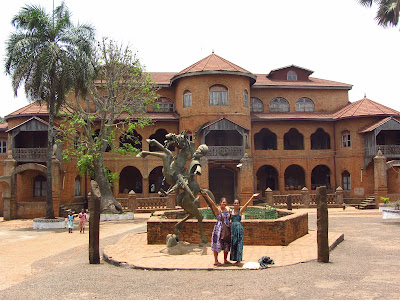 Sultan's Palace, Foumban, West region, Cameroon
Tip: Try to visit Foumban on Wednesday as it's market day! The market, which is located right outside of the Sultan's Palace, becomes a sea of liveliness and color. 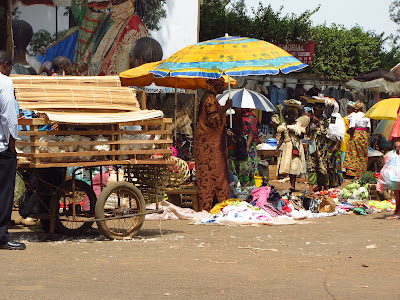 Foumban's Wednesday market
After shopping at the market, we headed over to the Village of Artisans. The village is not so much a traditional market of artisan objects, but rather a street of boutiques where one hops in and out of shops and watches everything from welding to carpentry. The souvenirs are expensive, but if you want statues or home items, this could be for you!
The best part of the Village of Artisans? Meeting the traditional chief of Foumban! We walked in the compound as there were beautiful mud huts painted with colorful murals. One of his young sons saw us and asked if we wanted to explore inside. He ran to grab his dad who was nobody else, but the chief, Amadou Ahidjo Mbouombouo! 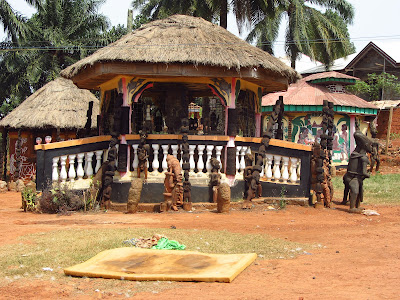 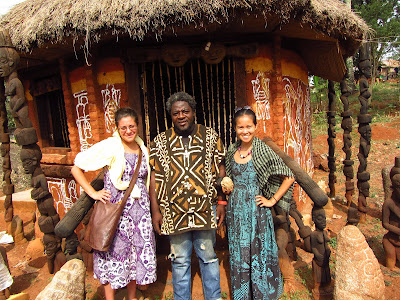 Traditional chief's compound
Amadou proceeded to show us dozens of photos of his trips abroad with the latest one to New York. He travels the world promoting Cameroonian culture and selling artisan artifacts. Not too shabby if you add that on top of being a chief!We were wowed by the artifacts in his house from the elephant feet to the military swords. If anybody ever wants to travel to Foumban or wants to stay at a traditional chief's house, give Amadou a call at 74 00 55 45 or 99 93 09 19 or e-mail at njimbouombouo@yahoo.com. He'll take care of you! 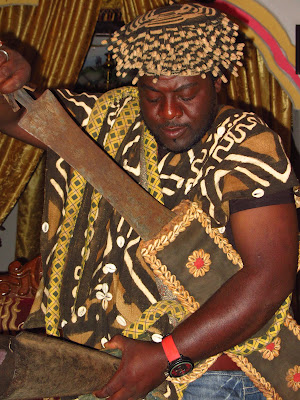 Showing us a traditional military sword 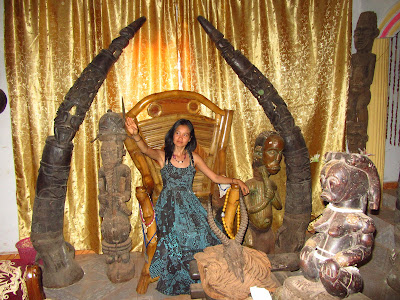 Letting me feel like a queen
On the way back to Bafoussam, Amadou took us to the village of Koutaba. There, approximately 30 Trappists monks produce coffee and syrup in the monastery. It was after-hours (make sure you come in the morning or mid-afternoon), but they were nice enough to take us on a quick tour. Foumban and Koutaba have easily become two of my favorite places in Cameroon. 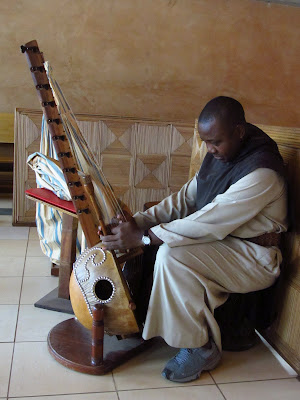 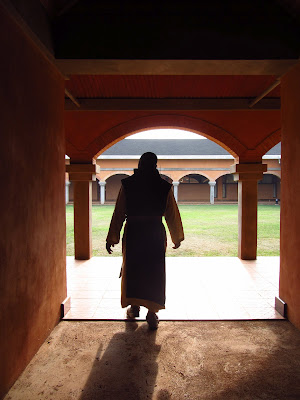