Doing Dusseldorf in a Day (Or Rather a Few Hours)

It was much cheaper for me to fly to Los Angeles from Dusseldorf, Germany than Brussels, Belgium, so Adam and I headed out to the train station.  He gets a good friend award as he carried a big chunk of my 100lb. luggage in and out of train! With only a few hours in Dusseldorf, we dropped off our suitcases at the Grand City Hotel Dusseldorf Konigsallee (formerly Four Points) before exploring the city.  The hotel was classy enough in itself, but the complimentary sodas and waters put it on the great hotels list (four free drinks!).

An international financial center, Dusseldorf often gets looked over by tourists for more popular cities such as Munich or Berlin.  However, I feel that its smaller charm with its fairs to nightlife is one of the reasons it's an attractive destination! 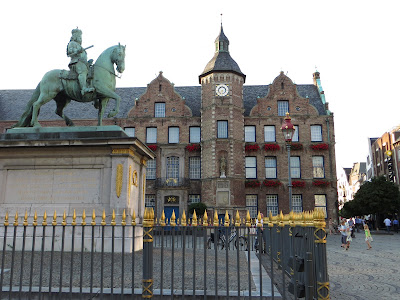 We walked towards the Rhine River to stroll down the Promenade (a highly recommended walk during sunset!) and get a quick glimpse of the Rhine Tower.  The tallest building in Dusseldorf at 170m, the tower also holds the largest digital clock in the world.  If we had more time, I would have loved to explore it, but our current mission?  Find a fancy place to eat that's close!

We soon made our way to Old Town and settled on Santiago Bistro.  Sitting on the cafe tables outside, we were able to people watch while enjoying the German sun.  Our waiter only spoke Spanish and German and we only spoke English and French, so it made ordering our meal very interesting!  A big hand to Dusseldorf; however, as a Wednesday night can bring out everyone in the city to enjoy a night out! 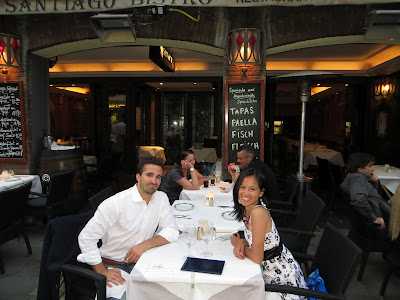 The week-long layover in Europe on my way back from Africa was indeed a good trip, but tomorrow? Time for this girl to go back to the US after twenty-five months away from home! 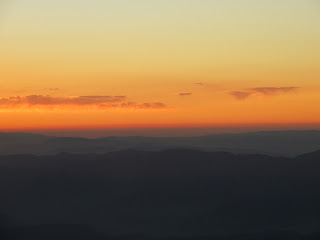 Sunset from my plane ride home!
Posted by Krystina Nguyen at 23:59