Local and Touristy Things to Do in Brussels, Belguim (Part 1)

Hello Europe!  After my two-year Peace Corps service in Africa, I took a week-long layover in Europe on the way home to the States. First stop: Brussels, Belgium!

Chocolate, French, waffles, and good food and friends?  Good deal for me!

After my buddy, Adam Persing, picked me up at Brussels Airport, we carried my 100lbs. of luggage to Hotel Eurostar Grand Place, an affordable and clean hotel just five minutes from the city center.

Tip: Looking to book a hotel?  Check out TravelShark, an online travel company with an insane database of lodgings. I had trouble finding affordable hotels with TripAdvisor, Expedia, etc. but TravelShark saved us!

First stop was the Brussel's "Hero" statue at the Grand Palace.  The statue symbolizes Everhard 't Serclaes who rescued Brussels in 1356.  Tradition says if you touch the elbow, it's good luck!

We swung by the Tourism Office which gave us great information about the day's festivities and information/coupons to the very cute Angora Arts and Crafts Fair.  The fair, just a few meters away from the Grand Place, featured local artisans selling hand-crafted goods from scarves to candles.


One of the must-see sites in Brussels is the Atomium Museum! The building's unique shape draws thousands each year as it's "neither tower, nor pyramid, a little bit cubic, a little bit spherical, half-way between sculpture and architecture, a relic of the past with a determinedly futuristic look." 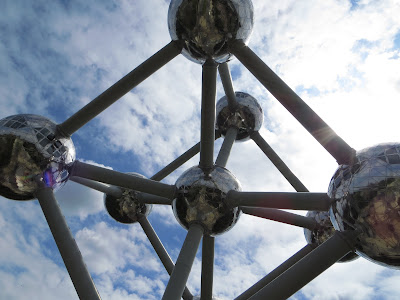 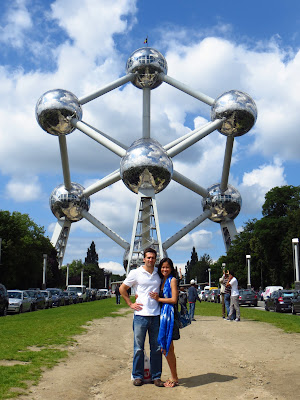 The impressive Atomium Museum from the 1950s is a one-of-a-kind sight!
I wasn't too impressed with the inside of the museum (unless you really love learning about water), but I did enjoy how the museum did bring up the issue of clean water access (or lack there of) in developing countries. 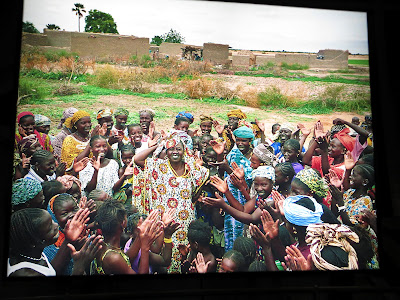 Part of the water exhibition inside the Atomium Museum.  This displays villagers in Africa.

After a quick photoshoot, we rushed back to the city to see the 4pm chocolate-making show at Planete Chocolat.  The hands-on chocolate demonstration was interesting enough in itself, but the chocolate samples and hot chocolate made it even greater.  And yes, everything was delicious! 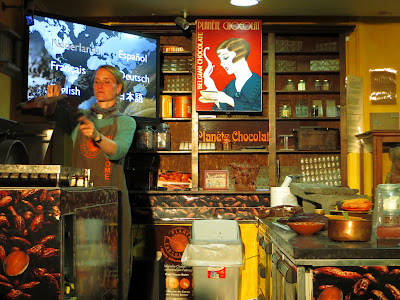 Since we were lucky enough to enjoy Belgium during their National Day (i.e. Independence Day), we headed off to Parc de Bruxelles.  Like Central Park in New York, the area provides a peaceful oasis away from the city's noises and hosts a myriad of activities yearly. Today's festivities included rock climbing, face painting, fighter jet riding (no joke),  dog racing, and sumo wrestling! 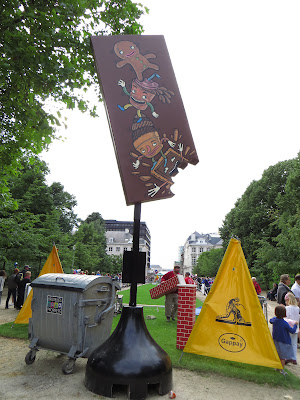 One of the many statues found in Brussels Park 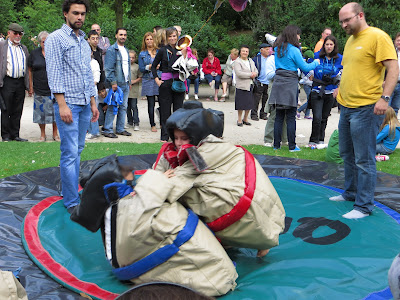 We planned the rest of the trip back at the hotel and then headed out for a delicious pho dinner before watching the day's fireworks.  Excellent first day in Brussels!
Posted by Krystina Nguyen at 23:59