The way the buses work in Saigon is that there are not really any set stops. You just kind of walk outside of your house and flag one down like a taxi. Inside, there's the bus driver and then a worker who collects the tickets/money. My volunteer organization had provided me with a book of tickets, but they had apparently expired in 2007.

So I started the morning with the bus worker yelling at me. She was yelling at everybody, but bitchiest to me. I originally thought I tore the ticket wrong, so I gave her another one. More bitchy yelling. Tried explaining that I didn't understand, but oh, man, just more bitchy yelling. I finally figured it out, but refused to pay and kept pretending not to understand. A sweet boy then paid for me. I hate her.

At the orphanage, the kids had school, so I just sat in the classroom with them while they learned. Lunch came around and I helped served. SO many kids.

The volunteer organization decided to surprise me and have me teach English to disadvantaged kids next door. They gave me a lesson plan and off I went! I had a group of high school students, all of whom thought I was hot. We played Hangman because apparently they enjoyed games. Gave the winners some books and stickers. 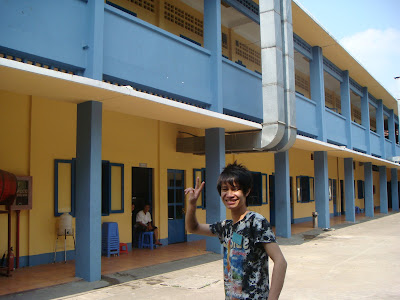 One of the troublemakers in my class. Thanks for posing though!

After my bad day of volunteering, I met up with Sebastian at Banh Than Market (miss those days when cell phones didn't exist and you could just tell someone to meet you somewhere and they'd be on time. LOVE life without a cell!). We haggled and I really learned that sometimes in a third world country, you should just shove out the extra dollar. Bought my first Abercrombie & Fitch crops for about $4USD and a new professional purse for $6USD.

The night proved a happy change of ending. We walked down Main Street with the lights still up for xmas. Instead of bowling, we ended up at the Sax N' Art Jazz Club on Le Loi. This cozy club was voted best Jazz Club in HCMC 2004 and 2005 by the Vietnam Economic Times and The Guide Magazine. That night, there was a bomb New Yorker busting out some blues as well! 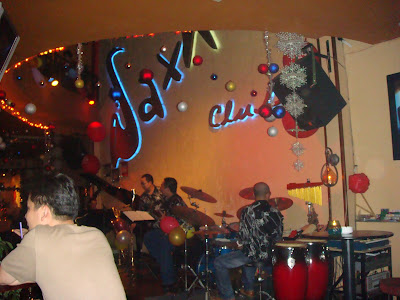 I feel Saigon/Vietnamese jazz is more mellow than other cities. It's really focused on the soulfulness of the singer, so you get lost in her voice. Very nice! 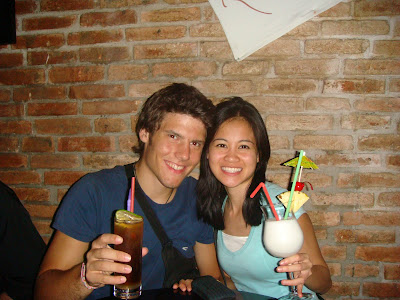 We enjoyed some Pina Coladas and oh, what a fabulous night to turn things around!

Posted by Krystina Nguyen at 02:59