I spent the morning shaking baby rattles with the children and discovered another volunteer from Cali! We spent the morning bitching about our unorganized volunteer programs (disappointing to hear ELI!). It was great just to find someone who could empathize. I helped to serve lunch and then made my way to Lotteria again. Miss Kelly Clarkson was playing on the radio as I ate and relaxed.

After the morning rest, I went back to the School for Disadvantaged Youths. The kids I had today were smart and oh, so respectful! I stood at the front of the class as the students walked in and once they realized I was their substitute teacher, they just stood up and waited for me to tell them it was alright for them to sit. Oh, the power!

The kids still thought I was cute, but they learned fast (we went through two lessons), so it's all good. At the end of class, I told them they could all go home and they blankly stared at me. Believing they didn't understand, I repeated it, motioned, and tried to say it in Vietnamese. More blank stares. Hence I packed my stuff up and left--once I left, then they were apparently allowed to. Why don't we show this much respect in the States?

Went to Brothers Cafe, a great price travel agency in District 1, to use their internet while waiting for Sebastian. The great thing about about other countries that they know news in the U.S. He asked me about the whole Countrywide debacle for goodness sake!

After our business talk, I met Sebastian at Cho Banh Thanh and we headed off to Jade Pagoda. Trying to tell me it was 60,000Dong both ways, I told the driver no more than 30,000Dong. No hustling from me! He was a great driver though teaching me how to say Happy New Year in Vietnamese as well as teaching me the difference between "ga" and "gai." 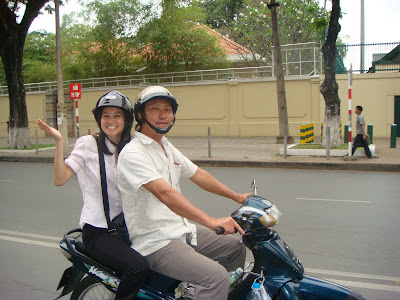 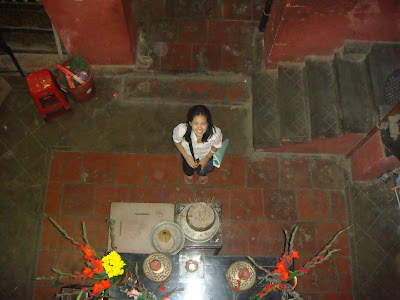 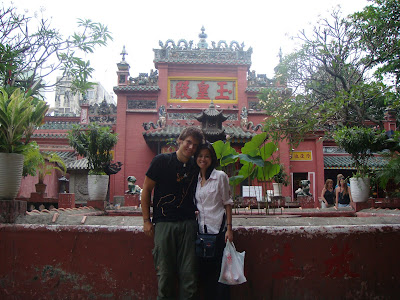 Jade Emperor Pagoda. Apparently the best in Vietnam!
We went back to Sebastian's guesthouse, so he could grab stuff to mail at the Postoffice. While waiting for him, I got a beautiful pic of the Notre Dame at night! 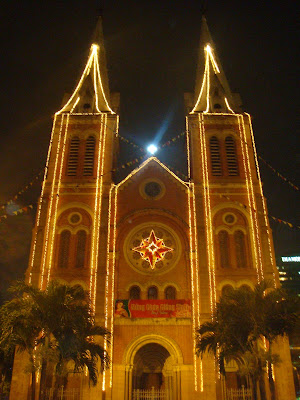 The Notre Dame looked gorgeous!
There, a cute girl, around 7-years-old tried to sell Sebastian a flower. As he refused, the girl yelled, "Sir, buy a flower, you monkey!" I offered 10,000Dong for just a picture, but she was intent on just selling her flower. I hope she makes it okay. 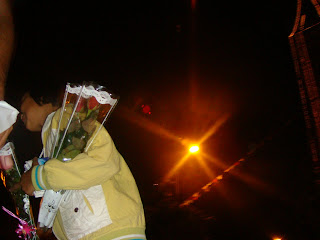 "Sir, you're a monkey!" She wouldn't let me take a picture!

We walked down Le Loi, a gorgeous street with its Christmas lights still up, and Sebastian bought his tickets to Cambodia. 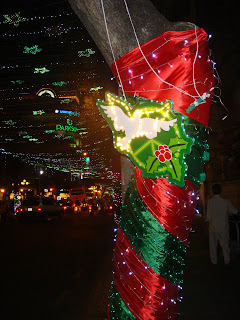 Le Loi during xmas time...
We had dinner at shady, little restaurant, where again, I was mistaken for a prostitute. "I know a man, I can get you $200 American dollars." "I am an American" "That's okay, you look Vietnamese!" Grr! Whatever...I think something was mentally wrong with him too.

Overall, it was a really good day (relative to the rest of the trip of course).
Posted by Krystina Nguyen at 02:59