Are We On the Travel Channel? Wine Tasting Time!

We were excited as today would be our wine tasting adventure! After a late morning wake up, we ran to the train station just in time; however, our train was not listed on the screen! Just as luck would have it, there was a strike! We were provided with another option to get to Bergerac - thus, we headed off to the station of Foy-la-Grande.

I called our wine connoisseur, Caroline Freely, and she stated that it was no problem and advised us to check the return ticket. We tried to book a return, but the attendant stated that she could not know the time from St. Gardonne to Bordeaux because of the strike. Thus, we went back in line and waited for another attendant. This one provided us with the correct information!

When we arrived at the train station, it felt like déjà vu Rive de Gier - we were stranded in the middle of nowhere! Out front, I recognized Caroline's picture from her wine website, www.frenchwineadventures.com. We jumped in her car and it immediately felt like we were in a television show!

As we drove, she explained the various vineyards that we passed along the way. We were in Bergerac, just outside of Bordeaux, yet the region still made Bordeaux-style wines. Her home was adorable as cute chickens and children ran all around! 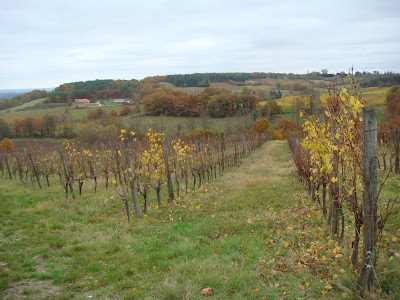 The wine workshop began with a bit of Bergerac's history and then into the 400+ appellations of wine. Soon, the wine tasting began!

We started off with two white wines: Semillon 2007 and Semillon, AC Bergerac Sec, 2006. I actually preferred the 2006 as it was less sweet and lighter on the tongue. We then went into the red wines, where we tried Merlot and a Cabernet Sauvignon Merlot, both 2006. However, my favorite had to be the sweet dessert wine! Chateau Haut Garrigue AC Saussignac, 2006 tasted the best (perhaps coupled by the fact that it came along with dessert!) 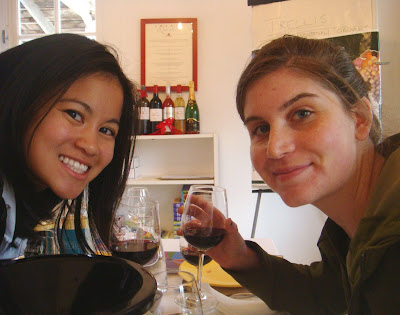 Tasting some Merlot
For lunch, Caroline provided tomato salad, bread, and several cheeses! It was also my first experience tasting foie gras - so delicious! Foie gras is a delicacy in French cuisine and must be tried if one is abroad. The tarts for dessert tasted so delectable with the Saussignac white wine that I had to buy some! 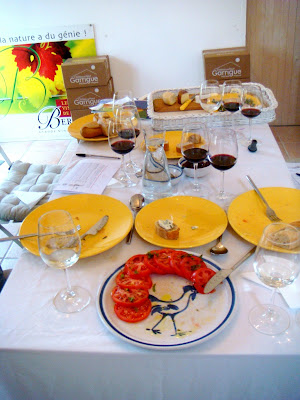 The aftermath of our cheese and wine destruction
As we enjoyed lunch, two older individuals came by to check out Caroline's wine. When they found out we were American, the first words out of their mouths were "You have a black president now!" Ahaha.

While touring the vineyard, one easily feels like he or she is in The Travel Channel! As we walked between the vines of the 30-acre vineyard, Caroline provided us with great information..."These vines are about sixty years old. You can tell by the size of the stem. Now back in the 18th century, the St. Emelion Castle over there served as a lookout point..." Yes, Travel Channel indeed! 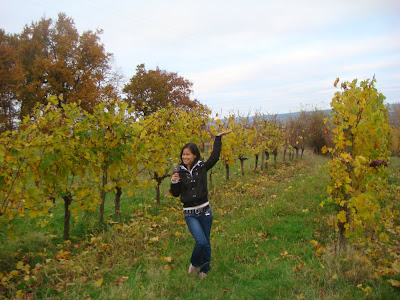 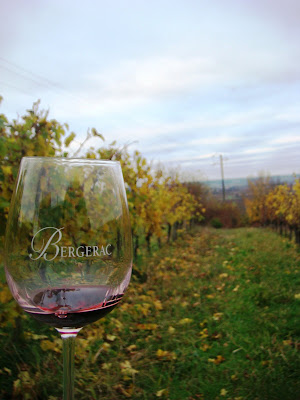 The beautiful wine fields of Bergerac
Prices of land for wineries: 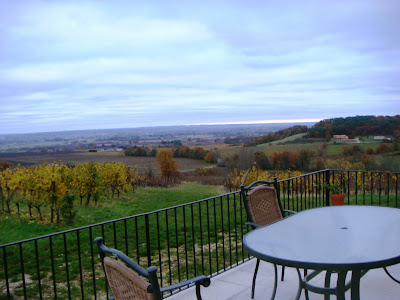 We had a mini-photoshoot in the vineyard and then it was pretty much time to go (boo, la grave!) We jumped back in Caroline's car and headed to St. Gardonne train station. Later on, she let me know by e-mail that she actually waited at the train station in case the strike affected our train. So sweet! 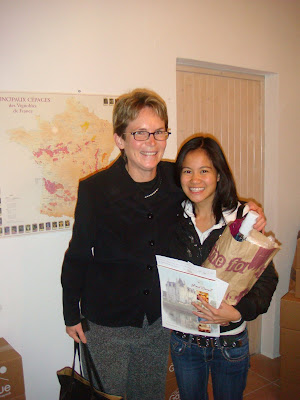 Leslie and I felt so exhausted after our adventure that we both fell asleep back to Bordeaux St. Jean! After we were rested though, we soon headed off to Dibiterie for live music. It was small, but cute and fun! Leslie was even lucky enough to catch a drumstick!

Looking back, I am glad that the big wine tours in Bordeaux were sold out! Caroline Freely's private wine workshop was actually found on the third page of Google. Many vineyards in bigger regions like Medoc are run by investors with much wealth, so they pay people to work for them. However, this wine tour was provided by a private family, who spent their whole lives saving up for their dream of owning a winery! Thus, we got to experience their passion with them! 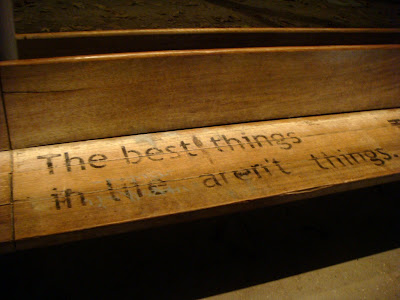 The bus bench that ended the night and speaks the truth! Fitting!