After dancing in Paris at La Locomotive (located next to the M0ulin Rouge), Leslie Donnelly and I headed off to Bordeaux!

The tram in Bordeaux is quite simple as there are only three main lines. Being a much less expensive city that others in comparison, ten rides were only 6.10euros.

We went straight to Tour Pey Berland, which resembled the Duomo in Milan with its towers and columns. The bell tower was constructed in 1440 and was named after the Archbishop of Bordeaux, Pey Berland. 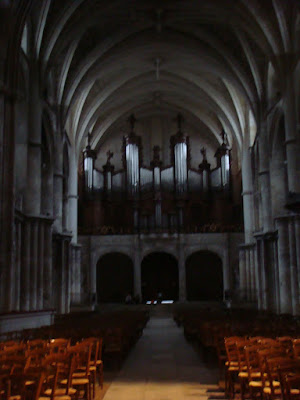 Tour Pey Berland
Tower Pey-Berland sits near; however, it was closed for some unknown reason. Thus, we went to Saint-Michel Basilica. The Gothic church measures over 350 feet high and a view from the top provides magnificent views of the city. 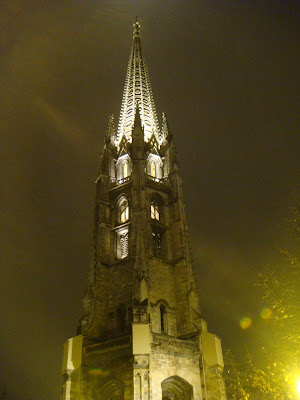 Tower Pey-Berland at night
We bought some chocolate chaud (hot chocolate) at a local shop - it was so small that it didn't even have a name! Afterwards, we headed off to meet our CouchSurfing host, Clothilde Vg! The very first thing the French girl said to us was, "We're going to cook dinner for you!" Success!

The house was tres grande! There were four bedrooms and a pull-out couch for Leslie and me. We had some wonderful chicken with Clothilde, her boyfriend, and two of the roommates. We definitely got to practice our Francais as the only one that spoke English was Clothilde! 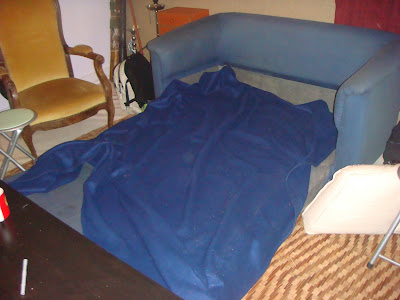 The life of a CouchSurfer!

That night, Leslie and I went down Rue Ste. Catherine, the longest pedestrian street in France. We made our way to Le Cafe Brun, which was a sweet place to relax with good music. We walked around the city a bit and met back up with Clothilde and her friends at a local apartment kickback. Everyone there was definitely a hippie - love it!

We spent the rest of the night speaking "Franglais" with two local French boys. They had quite a time speaking English with us and it was a good time had by all!
Posted by Krystina Nguyen at 17:59