The experience of taking the Eurostar is quite like going through the airport, yet the difference - one can show up much later (only thirty minutes before)! After getting my e-ticket boarding pass from the kiosk, I filled out the landing card, and went through security. I was pleasantly surprised that even before I arrived in London, I received two passport stamps. Woohoo!

Although arrival was scheduled at 12:38PM, there was a broken train in front of us. Thus, we didn't reach London until 3:30PM! We received a return ticket as a consolation - too bad I already bought my non-refundable one in advance!

Tip: A one-way ticket in the tube is 4pounds! However, a one day pass is only 5.30pounds!

After checking into St. Christopher's Hostel (note ISIC card gets you a 10% discount here), I headed off to the Southbank Center for my night of concerts! In the front room of Elizabeth Foyer Hall, was the Diabel Cissokho Trio. Utilizing traditional African sounds with jazz and Afro-beat, the music was phenomenal! More please?


The Diabel Cissokho Trio!
Since there was a break, I headed outside to discover that London is beautiful at night! 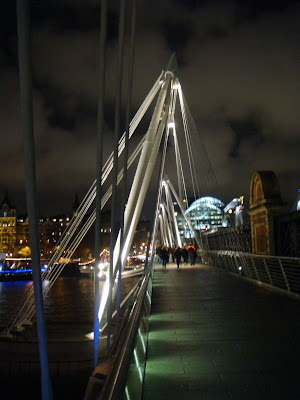 The Cologne Christmas markets were beautiful as well! I bought some delicious cheesy bratwurst and then walked on the Golden Jubilee Bridge that provided a gorgeous skyline view! Big Ben and the Golden Eye were the main attractions along with everything else by the River Thames! 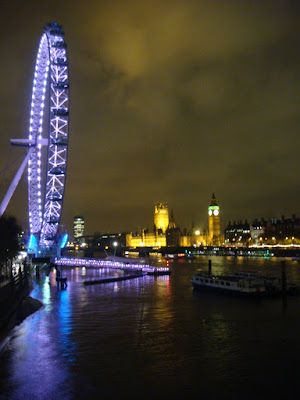 I then headed off to a benefit concert that helped the Magic Bus (which provides sports in slums to promote the self-confidence of children) and AMC (which promotes Asian artists throughout the world). At times, it was easy for one to get lost in the music.

Note: Make sure to read which elevator one should take while in the Royal Festival Hall. Each color and floor corresponds differently.

At the hostel, I met with Andres and Leslie Mao. We had dinner at a local pizzeria, Penne al Pollo, and then Andres and I headed off to the West End in Central London. We both took the London bus for the first time which provided us with a great view of London by night. While on our makeshift "tour", we passed by the Royal Courts of Justice and the St. Regents Cathedral. To a faulty website description, Trafalger Square does NOT resemble Times Square. Haha, it's just more of a square. 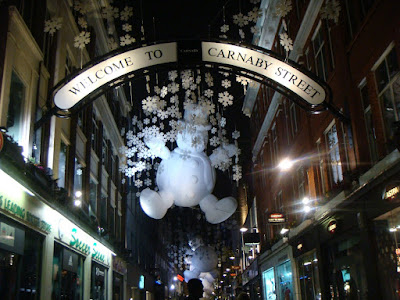 Christmastime in the city!

We then headed off to Picadilly Circus. With its Christmas lights, flashing neon signs, expensive and trendy stores, and upscale clubs, Picadilly Circus was the one that resembled Times Square.

The night ended with a visit into Ain't Nothin But Blues, a local blues bar. The live band was fantastic and everybody inside was dancing and having a good time. Good stuff!

On the walk home, we toured Liecester Square, another great location for food, pubs, and clubs. After taking numerous pictures of the snowmen decorations in the sky, I bought a gingerbread man/snowman cookie. After a fantastic day, could London perhaps rank up next to New York City and Paris? Perhaps!
Posted by Krystina Nguyen at 17:59