I woke the others up at 9:30AM to grab breakfast, but everyone was so sleepy! While they got ready, I strolled down Las Ramblas to the flea market. To my surprise, the merchants sold a variety of "goods" from fish to rabbits! The floral market and the H&M were fantastic as well!

La Familia Sagrada, Gaudi's most famous work, is a must see for anybody in Barcelona. Construction began in 1882, but is not expected to be finished until 2026. The privately-funded Roman Catholic church sits with intricate detail and draws thousands each year. La Padrera and Casa Batllo are more aesthetically pleasing though as they are not under complete construction (perhaps the beauty of La Familia Sagrada!). 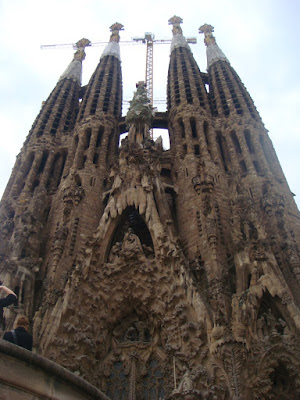 I then headed off to the Caixa Forum. With its modern space containing several rotating exhibits, locals find this art gallery popular while tourists never know about it! Hence, it is quite a treasure for a traveler!

As it was a sunny and clear afternoon, the cable car ride up Montjuiic was beautiful! The shallow hill allows a panaromic view of the city along with a 17th century castle atop. Although a scary and sketchy ride up, it was definitely a sight to remember. 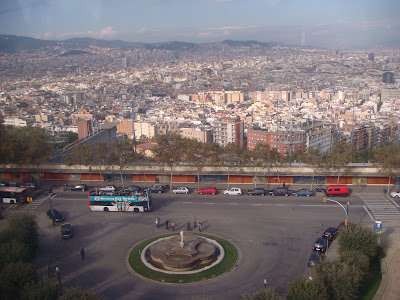 The hike to Parc Guell is long, but not too steep (as escalators will help if you go the back way! Here, one can walk around the enormous garden complex and find Gaudi's many artworks dating back to the early 1900s. It was nice as tourists and locals would all congregate together to enjoy the park! 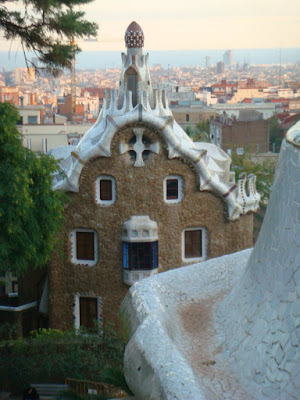 The entrance of Parc Guell

Next step in this busy day was to pick up the FC Barca tickets! It was only 18euros for the cheapest seats - good deal! Unfortunately, the metro stop was on the complete opposite side of the stadium (Camp Nou), so it took me a good twenty minutes just to walk around the entire stadium! It did provide a nice little tour of the city though.

Walking back to the hostel, one could easily find all the Barca fans celebrating in and out of their cars while blasting music and cheering down the streets. So much pride!

We then headed off to Placa Reial Square for a flamenco show at Los Tarantos! It was worth the trip as the thirty minute show was only 5euros. For some odd reason, the only shoes I packed were my leather boots, so I borrowed Pauline's ballet flats. Unfortunately, they were too big, but we all had a time making them fit with tissue paper! 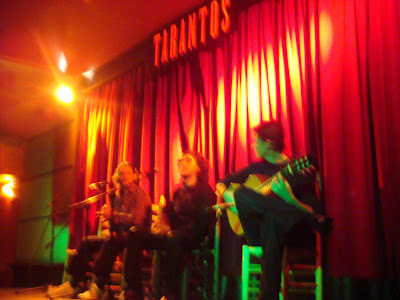 Tip: If you go to Barcelona and need a hostel, stay in Kabul! It's a great, loud, and fun hostel located right in the square of Placa Reial, where there are great restaurants and nightly flamenco shows next door. It's less than a minute walking to Las Ramblas - great location!

Adam and Pauline left to catch their bus to San Sebastian while Jess and I took off to the futbol game. Luckily, our seats were right behind the keeper and only three minutes into the match, Barca scored! The Belgium boys we met at the hostel texted us and we met up with them at the end of the game. 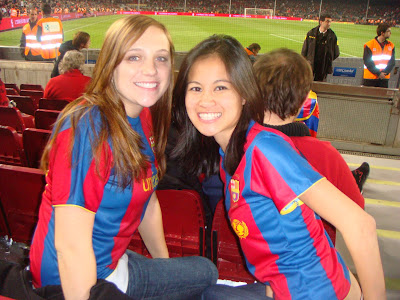 Viva Barca! Cheering on Messi and Barcelona at Camp Nou

On the way to Port Olimpic, we found an amazing, giant lobster statue with a smiley face drawn on it! Thus, I made the driver pull over so I could take a picture. Looking at it, the lobster could possibly be my favorite attraction in Barcelona!

We started off at the Australian Bar and danced the night away going in and out of the sixteen clubs and bars by the harbor. Arriving back at the hostel at 7:30AM, I took a thirty minute nap before waking up to catch our flight to Madrid.