Final day of our hike across Dogon Country! The 6:30AM departure allowed us to start before the sun came out. We thought the intensity was behind us as we passed the villages of Anou, Ibi, Nini, and Banani (yes, I have a good memory!) without any problems…and then we realized that Sangha rested on the TOP of a mountain. Here we go! 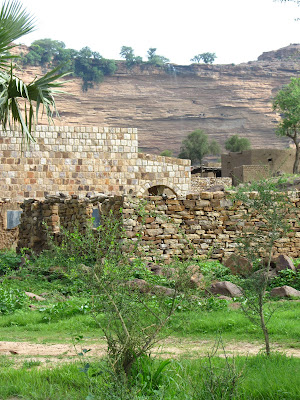 Look closely! Do you see the waterfall? 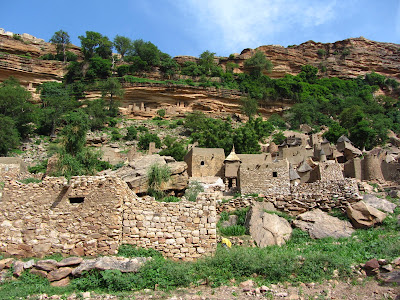 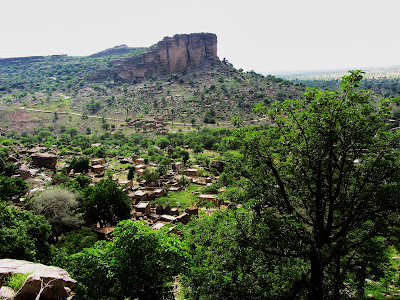 At the top, we received a much needed break while a group of young girls found us to be quite the attraction. I held a staring contest with two of the kids, but only beat one of them. 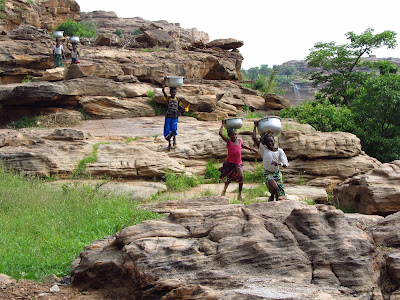 They may look cute until they start harassing you for candy - I really don't have any!

Note: When hiking Dogon Country, do NOT give away candy/gifts to the kids! This builds the notion that foreigners are rich and this has already led to kids following and bothering all along the trail. Aid does not equal handouts.

With our original chauffeur in Timbuktu (literally, not figuratively), we waited a bit after lunch for the new chauffeur to come. This was actually a great opportunity as it allowed us to explore the artisan boutiques and see indigo dye making. So pretty! 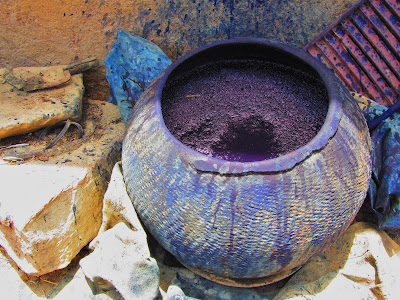 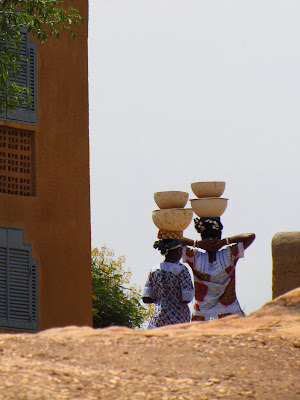 After two hours to Bandiagara and one hour to Severe, we stopped by the bank(s) to pull out money to pay our driver. The ATM at Ecobank (which didn’t work before for me) had a red barrier preventing any cards from entering. At another local bank, Liz’s Visa card wouldn’t work. At Bank of Africa, Lindsey’s card wouldn’t work, but Liz could get money. One down, two to go.

Knowing that there was an Ecobank in Mopti (fifteen minutes away), we stated to the driver that we’d give him another 5.000CFA to take us there. Well, the Ecobank ATM in Mopti accepted the card, but my money never came out of the machine! I checked the balance of the account and the ATM debited the 200.000CFA ($450US) I never received! Where’s my money?!

As the bank was closed (Friday evening) and I had a panic attack, a man popped up out of nowhere and inquired why the foreigners were so alarmed. Luck was on our side as he was the chief of the branch and just happened to own a boutique across the street and saw us. After explaining the situation, he brought us into the branch and called the main office in Bamako. He was also kind enough to allow me to use his phone to call our contact in Cameroon – too bad she hung up on me!

He filled out a Reclamation Form and stated that Cameroon will take care of crediting my account, but there would be nothing that could be done that day. And Lindsey? She tried three other ATMs and still could not pull money out…sigh…c’est la vie. 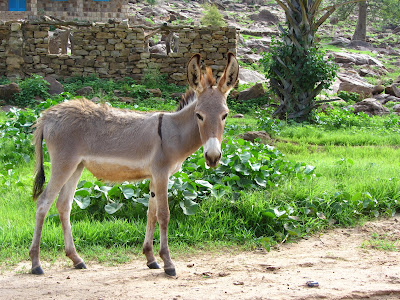 I bet this guy doesn't have to worry about ATM issues