Sure, We'll Stay at the Chief's House!

While living or traveling in West Africa, one must get used to waiting. Time is relative and life rolls on at a leisurely pace. The taxi guys that Anna called to take us from Koempoga to the main street were about 45 minutes late, so we waited. We took a car halfway to Sinkasse and then the driver made us get out and wait for another car. A car finally came and in Sinkasse, we found a van to take us to the Togolese border (after waiting for it to fill up with people of course!). 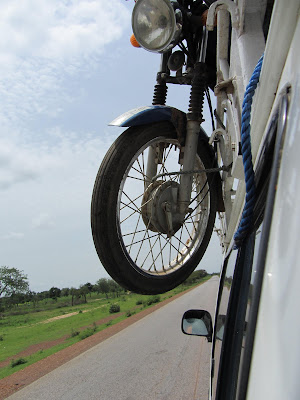 Why yes, that is a motobike hanging off the side of the car...c'est la vie 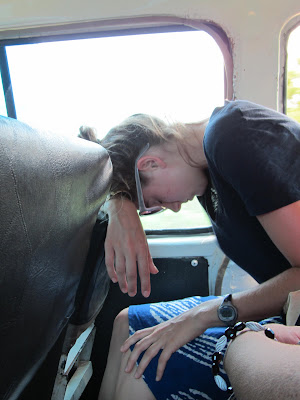 We are becoming quite skilled in traveling in uncomfortable positions

We negotiated 750CFA (~$1.50US) for the taxi guys to take us to both immigration offices (leaving Burkina and entering Togo). Thank goodness that we had legitimate visas because we were stopped by police even before reaching immigration.

In all of my traveling experiences, the visas for Togo were the easiest to acquire! In the main room, there was a large sign dictating the prices for each respective country. Further, after providing the 15.000CFA each (~$30US), we received a receipt-looking stamp inside of our passports dictating exactly how much we paid – no corruption here!

At the Togolese border, we found a bush taxi (normal size taxi that crams in 8 passengers) to Dapaong for 1.000CFA (~$2US). We wanted to stay for the Saturday market of this lively city, but alas, we were called to the tiny village of Goundoga, 22km from civilization, in search of a secret castle in a cliff (okay, maybe not too secret as we read about it in a Lonely Planet travel guide, but it’s definitely off the beaten path)!

The ride was beautiful as we rode past Northern Togo’s mountains and greenery. My taxi man asked me where we would spend the night. There should be a hostel in the next village 1km out, I thought.

“Would you like to stay at the chief’s house?” he inquired. Let me think…yes! 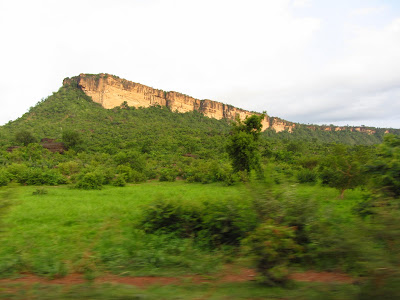 The chief’s son met us at the local school to direct us to the house. The taxi men also arranged to our transportation as well – so nice! The rest of the night was spent talking to the chief’s family. 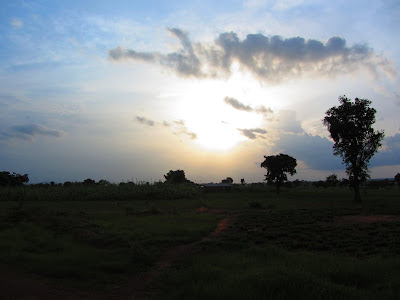 So there we were just chatting away underneath the stars in this tiny West Africa village at the chief’s house. Moments like these make life feel dreamlike, yet so real at the same time.