The Start of our Hike of Dogon Country, Mali

Today, we would trek what many seasoned travelers rave about: Dogon Country, Mali. Settling on a three-day hike, we received the contact of tour guide Amadou from Malian PCV, Jeremy Coats.

After calculating everything for Dogon Country (50.000CFA/person, 30.000CFA/car ride to Sangha), I would have about 3.000CFA left ($3US). Thank goodness for my travel mates as the Ecobank ATM was out of commission!

Amadou arranged a driver for us (who was appropriately named Amadou as well), but as a good husband, the driver decided to stay at home to tend to his sick wife. Thus, our chauffeur ended up being a very elderly senior citizen that barely spoke a word of French. His age would have fooled you though as his playlist included Rihanna’s “What’s My Name?” and Cyndi Lauper's “Girls Just Want to Have Fun!”

After the driver was lost for a bit (story of our lives), we found a farmer that showed us the way to Bandiagara. Bandiagara was only about an hour from Mopti – too bad it was another two hours to Sangha!

Note: Tours of Dogon Country usually begin in Bandiagara or Sangha. Bandiagara is the more typical path as there are the Falaise de Bandiagara/Cliffs of Bandiagara with sandstone cliffs labeled as a UNESCO World Heritage Site; however, Sangha is more off the beaten trail. Dealer’s choice! 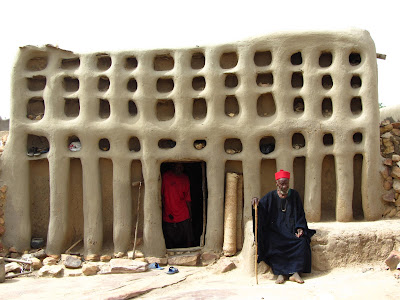 Amadou had just finished hiking for three days with Jeremy and instantly came to hike with us! I was a bit surprised at his announcement right before lunch though.

“We are going to hike for 15km this afternoon. That will take about five hours if you walk well,” he stated. Sigh…this is being told to a former New Yorker that used to take the subway from 34th Street to 42nd Street.

Tip: Always get the porter! It’s only 5.000CFA/person for all three days, but he will hold ALL your baggage with ease! 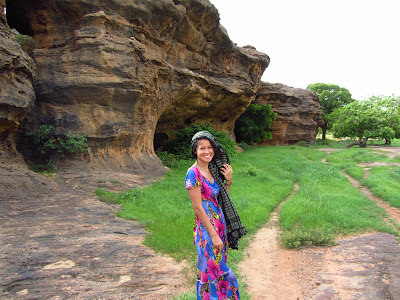 This is a happy me before the five-hour hike...photos of an angry me after the hike will not be posted

So off we went hiking underneath the beating African sun with just a bottle of water in one hand and a camera in the other. After our starting point at the village of Sangha, we walked straight on a continuous (and sometimes never-ending) journey. There were barely any people and each small village was miles from the next one. There was no end in sight until…

We reached the beautiful village of Tiogou! To the right of us was a river and to the left were the village houses. We walked down a bit more and realized the village was built on rock formations and water would trickle down step by step forming a village on waterfalls! Each step was more beautiful than the first – silly me for wanting to conserve my camera battery and not making a video! 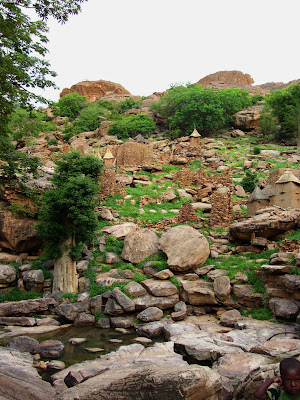 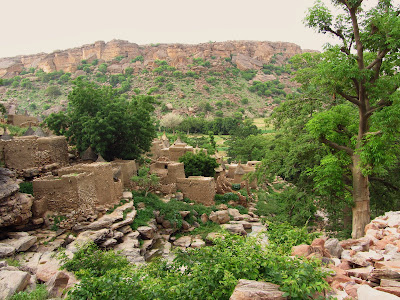 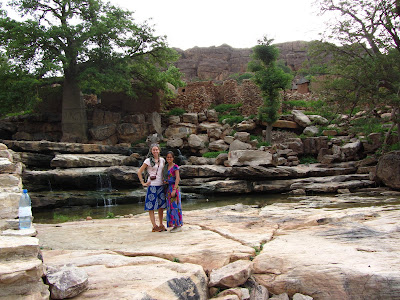 The beautiful village of Tiogou!

We had the opportunity to ford some small rivers, but I just let the porter and tour guide carry me over (i.e. as the rivers could have diseases like schistosomiasis!). We reached the village of Yendouma right at sunset. With a population of only 800, Yendouma brings enough tourism to have Hotel Mare aux Caima cater to guests. 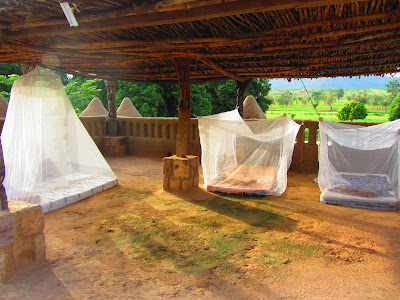 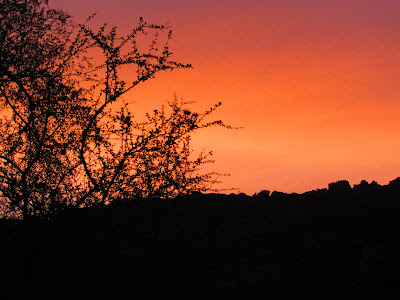 The spaghetti and meat dinner with Yogi tea (thanks RPCV Eric!) was an excellent way to finish the day before going to bed on the rooftop (way too hot to sleep inside!)