All that is the Vatican and More!

We woke up this morning at 9AM while the boys rested fast asleep! Before joining our tour of the Vatican and St. Peter's Basilica, Julia and I lit some candles at the church of Saint Maria Degli Angelic Dei Martiri (whew!) It's sometimes these little simple events that I love. 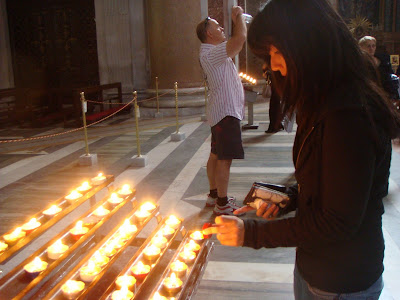 Julia lighting up a candle and saying a little prayer

We joined the tour and walked over the Bridge of Angels to St. Angelo's Palace (also more locally known as Castel Sant'Angelo). The Bridge of Angels was originally called Ponte Aelius as it was named after Emperor Hadrian's second name (aha! Full circle to Greece!). The Bridge was constructed in 136AD to connect the city of Rome with St. Angelo's Palace. According to our guide, St. Angelo's boyfriend tried to break up with him, but they ended up taking a vacation together, and eventually he committed suicide. Depressing.

Our guide was quite hilarious throughout the tour; she walked us into an alley and stated, "Now this is the point where you all get robbed...just kidding!" Haha.

The Vatican Museums are as beautiful as one imagines. Again, our tour guide pointed out two look-a-like statues to us: one of Bill Clinton and one of Dr. Spock. Oh, geez. Look to the right and you'll eventually see them! 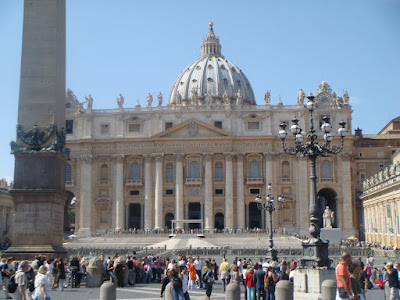 The Vatican, a place everyone should visit in their lifetime
The Vatican Museums actually are comprised from one big block of marble from just 500 years ago. Displaying works collected over centuries by the Roman Catholic Church, the Vatican greets over four million visitors each year.
Tip: Make sure you take a tour of the Vatican! I usually can't stand paying for these things, but there's so much history that it's worth it! 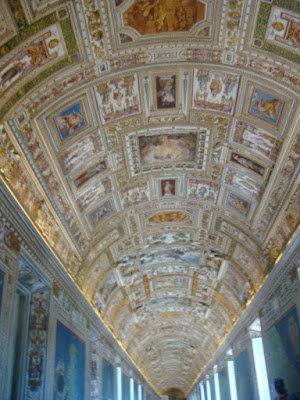 One of the many gorgeous ceilings of the Vatican Museums

Then came the Sistine Chapel...absolutely...breathtaking....indescribable. It's amazing that this was painted by only one man. Genius!

Although one is not allowed to take pictures, the image permanently stays in the mind. The 12,000 square feet ceiling portrays Soloman's Temple and the Creation of Adam amongst other religious figures with so much detail and vivid imagery. This ceiling is argubly Michaelangelo's finest work in painting. And to think, his strengths were originally in sculpting!

At the top of the cupola of St. Peter's, the view is magnificent! Be warned though, it's quite winder and the staircase leading up to it is a never-ending twisted path! 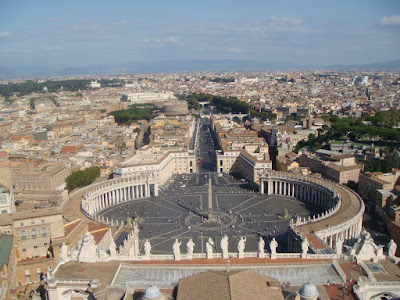 View from the top of St. Peter's Basilica

St. Peter's Basilica is the largest church in the world holding over 60,000 people. If one wishes, one can go below the Basilica to find the tombs of popes past. Very powerful if one is religious.

I finally picked up some good medicine for my throat as we headed to the metro to the Trevi Fountain. At arrival, we could barely even see the grandiose fountain because of all the tourists! Unlike our previous venture to the fountain at 3AM, there were realistically hundreds of people here in the daytime. 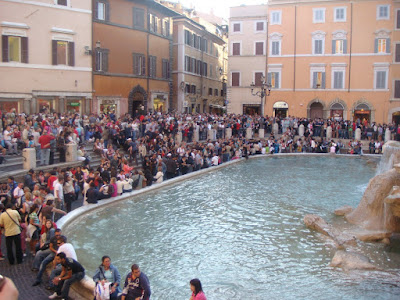 Trevi Fountain the the daytime...crowded!
Standing eighty-five feet high and sixty-five feet wide, the Fountain gets thrown approximately 3,000 euros daily. The money is used to subsidize a supermarket for Rome's needy. 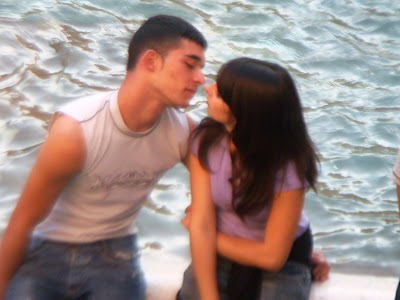 Oh, young love...after taking this picture, I was hit in the shoulder by a horse's snout
Naturally, we then walked up the nearby Spanish Steps. These 138 steps are supposedly apart of the longest and widest staircase in all of Europe (Widest, I would agree; however, the ten minutes it takes to climb these are definitely MUCH quicker than steps as of the Duomo in Florence - see future blog posts). At the top, Julia and I bought artwork from a local artist. 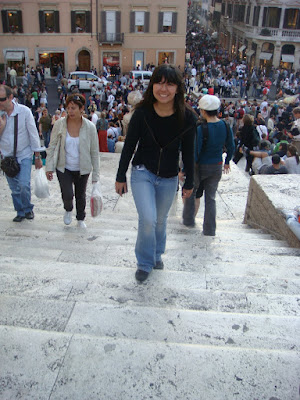 Julia happily making her way up the Spanish Steps 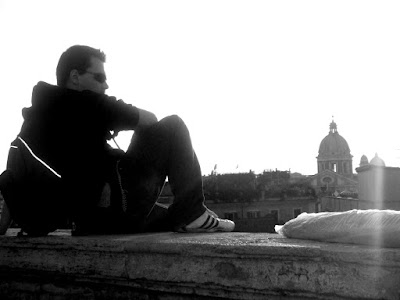 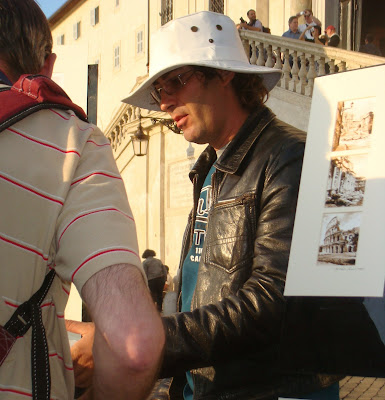 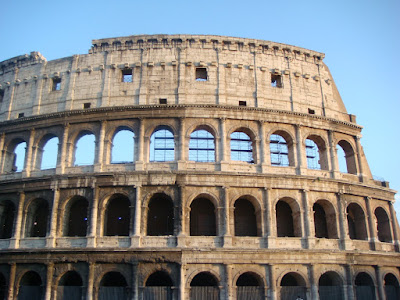 Right at the Colosseo metro stop, just as beautiful in the daytime!
Before heading back to the boys' place, we stopped to get a quick panini. Although it said 5euros, they tried to charge me 7euros. We walked away and they threatened to call the "policia." For not wanting to buy something I never touched? Right!

We sat with the boys while they ate about five courses of Chinese (man, can boys scarf down food!). At this point, I left my medicine at home; with a shot voice, I was able to communicate through Julia and our "friendship connection."

We took the bus to Termini back to The Yellow Bar where they earlier held a "male batenders dress like girls and vice-versa" theme. I definitely tried to jump piggyback onto James, but he immediately dropped me! With the two of us on the ground, the others definitely had their laugh for the night. At The Yellow Bar, we all tried the infamous "Chuck-Norris-Roundhouse-Kick-to-the-Face" drinks! Haha, oh, Chuck Norris! 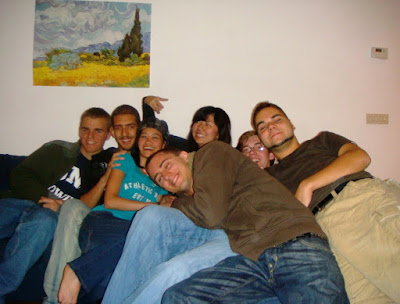 The boys before our night out! 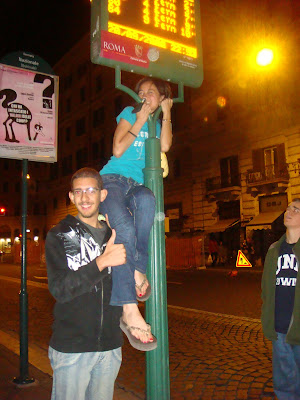 Doing pull ups on the lamppost...five seconds before James (right) drops me piggyback-style
We soon gathered at Campo de' Fiori, a piazza that is now a popular hangout by foreigners (mostly young Americans) and college students. James was lost and the group headed home early, so Guy and I walked around and ended up at Scholar's Irish Pub.

We had some Stracietella gelato and headed home passing many historical sites such as Trojan's Column. Back at the apartment, we tried picking up Julia thinking she was a heavy sleeper; she's definitely not! Just another night in Europe!