From Los Angeles to Sydney

After the 14.5 hour journey from Los Angeles, I had finally arrived in Sydney! As I must look like a sketchy individual (or as the Aussies like to say, "dodgy"), I was stopped at Customs for only having one backpack and vacationing in Australia for only four days. Sorry that I'm a light packer and that I have to head off to Europe in a bit! After he cleaned out my backpack utterly ruining my packing and getting the misspelled name on my Visa fixed, I was finally good to go!

The hotel was in the center of the city at the train stop of Museum Station close to Hyde Park. Excited to see the town, I took a stroll down Macquerie St. to head toward the Opera House of course!

Tip: Don't take Macquerie St. to see the Sydney Opera House, otherwise, you can easily be disappointed by it's small size. Go across the Harbour by the Museum of Contemporary Art for a more impressive view! And make sure to go on an Opera House tour! 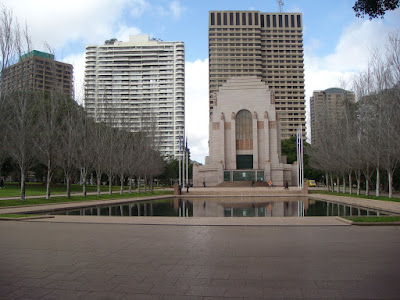 The Pool of Remembrance and the ANZAC Memorial. Hyde Park was named after the original in London 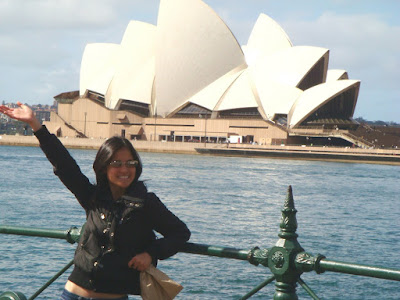 At last...The Sydney Opera House!
Although the Opera House appeared small at first, the Essential Tour proved that the performing arts venue was as magnificent as the hype surrounding it. Contrary to popular belief, the House is not actually one large arts center, but rather several separate venues. For example, the two largest "shells" actually comprise of the Opera Theater and the Concert Hall. Finally completed in 1973, the $102 million House originally designed by Jorn Utzon proves to be a magnificent architectural structure that was well constructed before its time.

Afterwards, I took a tour of the Botanical Gardens where unfortunately I was attacked by a damn pelicans. I will never understand why wild animals seek revenge upon me. 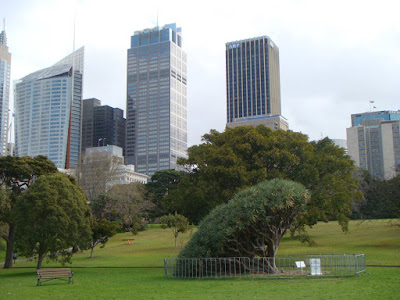 The over 100-year-old Dragon's Blood tree! It's believed that the roots were unable to support its rapid increase in weight because of recent rainfall
Beyond flight and accomodations, Contiki actually provided with numerous "excursions" for my stay here in Sydney. One of them consisted of a ride on Oz Jetboating. Originally described to me as a relaxing boat tour in the Sydney Harbour, I figured this would be a relaxing way to start my trip in my jetlagged state. To my surprise, Oz Jetboating is actually at thirty minute adventure ride in which each jetboat rides up to 80km an hour! Sigh...there goes my relaxation! 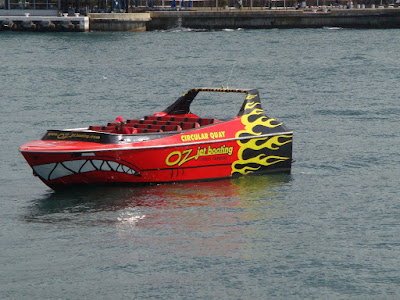 Oz Jetboating...speeds of 80km per hour in the Sydney Harbour!

After meeting some friends Californian folk, we headed off on our adventure. Right as we began the journey, fate decided to make it rain on us, while our driver decided to do about half a dozen 360 turns. He hit the gas and popped a wheelie to which the rain made it feel like nails were smashing our faces. We caught some air and continued this madness...for twenty-three more grueling minutes. How do I always get into situations like this? 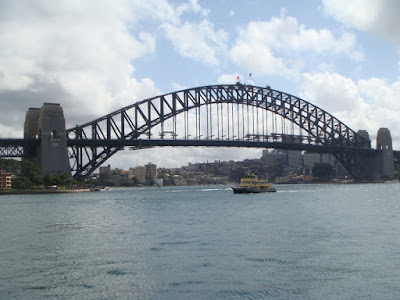 After an amazingly warm shower, I headed back to the Opera House to watch "Instructions for Modern Living." Student tickets, as well as adult tickets, were pretty affordable at $25 and I just couldn't resist seeing a show here! It was a great satire on things we never think about in our daily living, such as how astronaunts probably get bored just sitting in their spacecrafts and radio deejays not having anybody call. I wonder what they must think. The local student I met and I felt it was a show worth the money; I just wish I had more time to see all the shows! 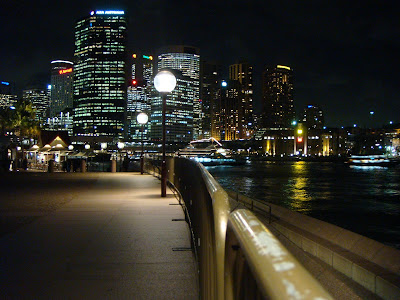 The city of Sydney at night - gorgeous!

Good night, Sydney. I'll see you in the morning!
Posted by Krystina Nguyen at 17:59