Imperial Ruins and the Colosseum

Julia and I first started the morning watching a protest for workers' rights. 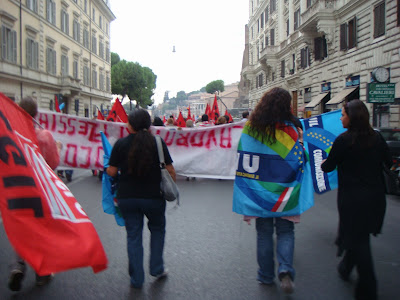 A protest to start the day!

We took pictures of Imperial Ruins and of course, needed to take a picture with a fellow Trojan; we were quite proud of ourselves as we bargained him down to 1euro from 5euro. The Imperial Ruins, more commonly known as the Imperial Fora, consist of monumental public squares (fora) constructed between 46 BC and 113 AD. Next door lies the Roman Forum, a larger and more popular tourist attraction. 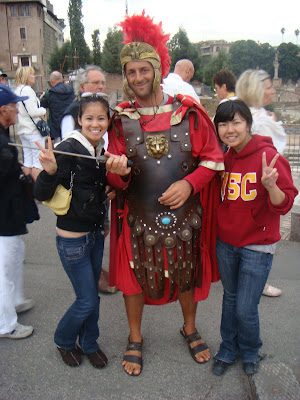 The Roman Forum is an ancient complex of temples, arches, and basilicas. It was the central area in which Rome developed as it served as an economical, ceremonial, and political site. A simple wander around the site takes a good 1.5-2 hours. 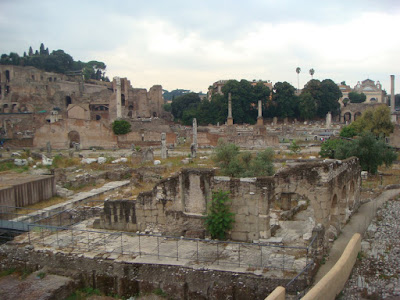 Luck on our side, it began POURING rain as I felt so ridiculously sick! We spent some time under the Arch of Tito before we visited Augustus's House. The latter holds a special place in history as a single fragment of painted plaster led to the discovery of a series of exquisite frescoes. The frescoes were later commissioned by Rome's first emperor. 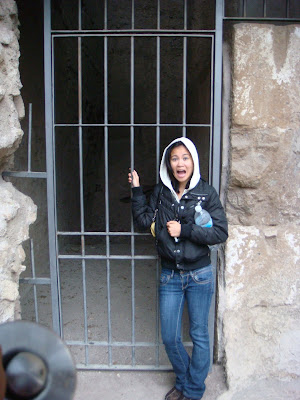 In jail at Augustus's House

We took pictures at Palentine Hill, where emperors and aristocracy lived in ancient Rome. Giving up on our toughness, we decided to give in and buy ourselves umbrellas! After a good lasagna lunch, we headed off to the Arch of Constantine and the Colosseum. On October 28, 312, the Arch was built to commemorate Constantine I's victory over Maxentius at the Battle of Milvian Bridge. One of the most remarkable sites in Rome is of course, the Colosseum! The largest ampitheater in Rome, it can hold 50,000 spectators and is a spectacle that is not to be missed (you probably couldn't even if you tried!) 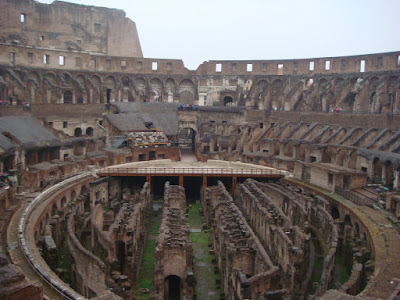 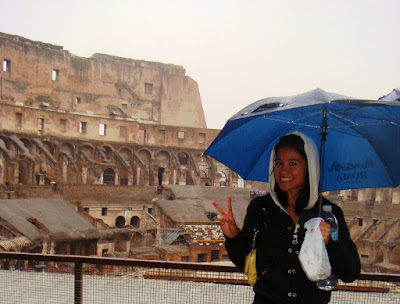 The Colosseum of Rome. It's like I'm back home!
We walked to The Pantheon despite my sickness and the pouring rain. Unfortunately, Roman streets are unfriendly in general, meaning that you will get lost, streets will not be on maps, and you will get frustrated! Moreover, drivers are crazy and street simply do not make sense; a street will have one name on one side and another name on the other side; streets will curve as well and obviously this can easily frustrate one!

The Pantheon was originally built as a temple to the gods of Ancient Rome. It is the best preserved of all buildings and on rainy days, water falls from the top!

After jumping back on the bus to Alec's, a random guy let us in the apartment to which we learned that he was the fifth roommate. Small world moment: although we were in Rome, it turns out that he graduated my high school one year later! Crazy!

After drying (since water sipped through my umbrella's cloth) and eating a delicious meal at L'Archetto di Cavour, Julia and I convinced all five roommates to come out with us that night. I talked to the boys about going to Testaccio, but they got confused and took us to Terraccio. It was all good as we went to the Coyote Club. 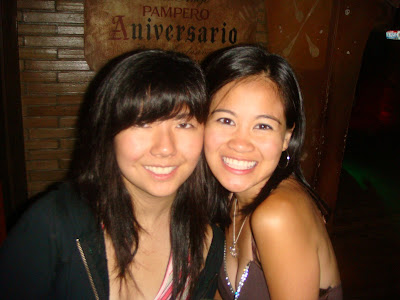 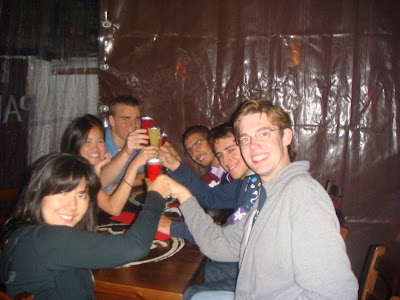 At the Coyote Bar

We danced, danced, danced all night and all of a sudden, everyone left Guy and me! We left Terestaccio looking for the main street to which Guy said he knew...to which he actually didn't know the way. Long story short, we tried going from the river to the university to the fresh market to Terraccio to the Colesseum...and we never made it. Finally catching a taxi, we got home at 4:30AM. 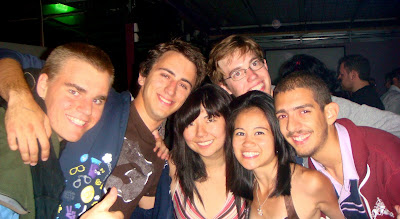 The clubbing crew!
And then Zach stumbled in at 5:30AM. Haha, told you one easily gets lost in Rome!