A Little Layover in Philly

After about a day and a half back from Los Angeles, it was yet again time for me to jump onto another airplane! Leaving at 10PM from LAX, I had an eight-hour layover in Philadelphia. Hence, off I went to explore the city!


It was about 7AM when I got into the city, so I waited for the Visitor's Center to open. Being my overly cautious self, I quickly grabbed all my belongings ready for a mugging; they preceded to ask if I wanted to hear a verse from the Bible. Oops.

I had made a reservation to tour Independence Hall as I missed it on a previous trip. As one of the most important buildings in our nation's history, Independence Halls served as the signing grounds of the Declaration of Independence and the Contitution. It also served as the meeting spot for the Second Continental Congress from 1775-1783 and is now listed as a World Heritage Site. 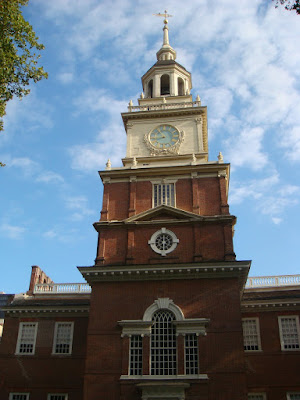 Independence Hall
It wasn't as exciting as I believed, but well worth to see at least once in a lifetime. I took the $2.00 bus and headed off to U. Penn to visit the campus and Miraya Jun! 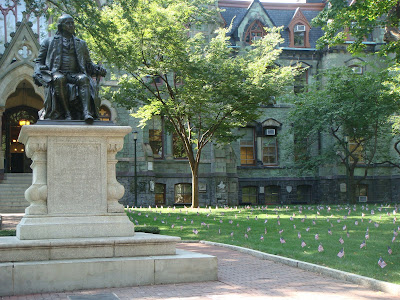 September 11th Memorial at the University of Pennsylvania
The Fine Arts Library luckily provided usable internet (unlike everywhere else on this campus for a guest!) and Miraya gave me a campus tour. Go Ivy Leaguers. 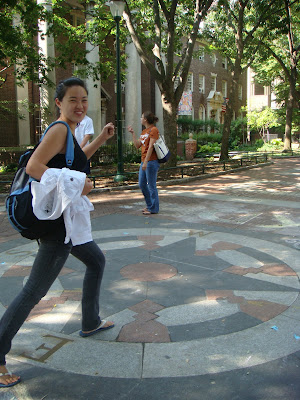 The Myth: As a freshman, you can't walk over the compass, but as as senior, game on!
Back at the Philadelphia International Airport, a Sept. 11th memorial was held. It seems unreal that seven years have actually passed since that tragic day. The memories still tug at the heartstrings and although the effects on each person vary, the United States of America became more united as one. We shall never forget.
I woke up to the voice of Julia Wang - my travel buddy had arrived! Onto backpacking Europe and chasing after dreams...
Posted by Krystina Nguyen at 17:59